Oh my. I have no idea how to begin this book review. This book is part mobster murder suspense and part paranormal comedy. The cast of characters is a very unlikely bunch who somehow blend together in what turns out to be the absolutely best story. They are the perfect example of that sometimes our best family is the one we choose. This is not my usual genre, although, I'm not at all sure what genre this is if I'm being honest. But I am very glad that I read about how Jimmy found his way into a career as a New York mob lawyer followed by his escape with his wife into the witness protection program. But is his escape successful? Or will Valachi find him and "tie up" those loose ends? Mr. Valachi is used to getting what he wants and ordering a hit is part of his routine business transactions. 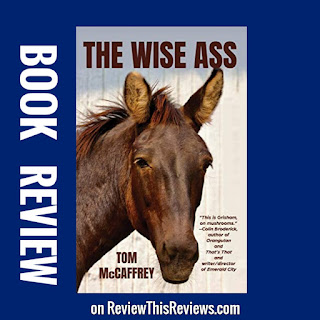 The prologue begins with Jimmy McCarthy as a young child growing up in the 1960s in an Irish family in New York near Yankee Stadium.

"... my attention shifted to Jerome Avenue and the overhead squealing of a southbound No. 4 train pulling into the Yankee Stadium Station. At the ding-dong-ping sound of it's opening doors, my eyes followed the disturbed descending flock of pigeons gliding down from the guano covered steel girders of the El to sample the last of a patch of flattened Crackerjack on Jerome ten feet away."  - young Jimmy

Chapter One begins with Jimmy, an average guy "with a penchant for procrastination" who got himself through law school. He felt like an imposter, someone who didn't deserve to be there, having been "born with dirt under my fingernails". But not only did he get through law school, he landed a job with large law firm where he did well. He and his wife Gina, a Registered Nurse, had a stable and comfortable life as New Yorkers who worked hard and long hours. They loved their city and were living the life complete with seeing Baryshnikov at the Lincoln Center.

Things changed only by chance. Dan Pearsall happened to be in Night Court when Jimmy was working his legal magic. Dan was there because his son was in Night Court as a defendant and Dan convinced Jimmy to get his son off the hook as he had the firm's client Jimmy had just represented. And there it begins. Dan was not only a concerned parent but also the gateway to Jimmy being introduced to Mr. Valachi. Jimmy is quickly offered a job as a mob attorney, handling the "legal" work... reviewing contracts and such. So his choice is the very lucrative and less strenuous contract work or to continue as a grunt in a firm working insanely long hours at the beck and call of the partners, and with no recognition. You can guess which he chooses.

For awhile, he and Gina live a plush life in a wonderful new home with savings accounts bursting at the seams... so much so that they have multiple offshore bank accounts to hold the excess.

Then the Feds arrive. In the early morning hours multiple important members of Valachi's group are scooped up. Valachi included. Jimmy included; he and Gina woken from their sleep by armored men breaking his door down and bursting into their bedroom.

Things take a huge turn, Jimmy turns state's witness and then he and Gina enter the Witness Protection Program. Following the trial, they are given new names and are relocated to a very small rural town in Colorado.

In Colorado they meet the modern versions of Mr. Ed, Mork and Mindy, and Jennifer Love Hewitt's character in the Ghost Whisperer. Seriously, the book suddenly includes a talking mule named Claire, a couple of aliens, and a woman who talks to dead people in addition to a flawed FBI agent, a veteran who has gotten a handle on his PTSD, and a lesbian couple. In order to avoid spoilers, I will not describe the storyline after Jimmy and Gina "Moran" move to the country. And if you don't like to read spoilers, take care reading any reviews on Amazon and Goodreads as there are many, many spoilers.  I get it. This story is so difficult to describe without spoilers.

My Personal Thoughts and Reactions

I will say that author Tom McCaffrey's writing style had me hook, line and sinker beginning in the prologue. I was transported to the streets of New York through the eyes of a child. Later, it somehow all seemed plausible that this talking mule and these people/aliens not only existed but were believable. They were relatable.

This is definitely NOT the type of book I usually read. I am surprised that I would recommend this genre at all. But as soon as I finished the last page, I knew I had to share it with you.

I tend toward psychological thrillers, stories with terrible people who do terrible things. I think reading a fictional story that has characters who are worse than humans (even if it is just barely) really is an escape for me. Rarely, I read romances. And more recently, I am enjoying historical fiction.  But it was late one night, and while I have many to-be-read books in my Kindle Paperwhite (which I love!) I wanted something different. I was in a rut. Nothing sounded appealing. I had my browser open to one screen in Amazon and one screen in my public library digital loans. I browsed description after description. And thought time and again, "been there, read that".  I was becoming annoyed that so many stories seemed cookie-cutter that night.

I read the description of The Wise Ass and quite frankly thought "that's probably stupid".  At a cost of $0.00 with my Amazon Prime, and in my desperation for something to read for bedtime, I downloaded it. After all, if I hated it, all I would lose a bit of my time and gain more temporary irritation related to my reading rut.

I am so glad I chose it!

I enjoyed Tom McCaffrey's writing style and was transported from the streets of New York City to fields of Berthoud, Colorado. The writing style somehow made everything believable. Even Claire, the talking mule, became someone I'd like to meet. In some of the reviews I read there were mentions of this book representing the LGBT community (with the same-sex relationship of Bobbie and Helen) as well as the animal rights community (Claire was rescued from a trip to the slaughterhouse) and the vegetarian folks (again... Claire). I not only thought the story line was going to be stupid, but also thought the book would be full of heavy-handed social commentary. I was so wrong. This story and these characters were entertaining and engaging; each one unique and interesting. And there was no lecturing. Only flawed humans (and aliens and a mule) who were trying to find their way through life and find their place in a community.

I believe I have found a new favorite author and as soon as I have this review completed I'll download An Alien Appeal (The Claire Trilogy Book 2) and spend the remainder of my day snuggled up and getting lost in a good book.