The online video game World of Warcraft was released in 2004. It was among the first major online video game that was American made and had a big enough budget to deliver on it's promises.  Since it is still alive and well, in 2022, and still going strong, it has delivered everything a gamer could hope for.  WoW has a great storyline, a multitude of  races and classes, professions, thousands of quests, and a huge multi planet landscape to be explored.

I started playing WoW in early 2005, I was in my forties and had never played an online game in my life.  I have to admit, the first time I logged in, I was in awe of what I found.  You have a character and you are in a fantasy world.  The other characters in the game are other people from all over the world that you can meet and make friends with.  There are cities with stores and banks and inns and embassies!  In the country there are cottages and animals and lakes you can fish in.  It was beautiful!

It is pretty over whelming, but right away they give you things to do, and the tutorial explains most everything you need to know.  You just take off and never look back!  Check out the video below for a look at the fun this game is!

What does this have to do with Older Folks?

Most people think that video games are for kids and that most of the people that play are under 18.  This may have been true in the beginning, but it most certainly is not true now, 18 years later, and not for the reason you might think.  Sure, a lot of people who started in their teens are now in their 30s which could skew the average age upward, but also, many older people have taken to playing the game because their kids were playing it and because their friends were playing it.   There is so much included in the game World of Warcraft, it has interests for all ages.

Can An Older Person Really Keep Up with Kids in a Video Game?

This is the great thing about World of Warcraft.  You don't have to compete with anyone if you don't want to.  WoW can be anything you want it to be.  You can play completely alone, if that is what you prefer, or you can be very social and make friends, join a guild, or even role play if that is something you enjoy.  If you like to compete, you can group with larger amounts of people and do raids where large groups of people get together to slay big monsters for rewards.  There are even player versus player fights, should you want to participate, from one on one duels, to armies fighting armies.  You can make this game whatever you want it to be.

Why Would An Older Person Want to Play a Video Game Online?

Many older people are lonely and miss the socializing that they enjoyed when they were younger and more mobile.  WoW gives you the opportunity to make friends and enjoy the company of people around the world.  You can explore places, go on adventures, battle monsters, or just sit and talk.  It offers an outlet to a greater world instead of the smaller world that some older people live in.

It also provides fun and entertainment and a never ending list of things to do.  It can give purpose and joy to people who have too many hours in a day and just sit around being bored.  WoW also helps to keep people sharp and thinking.  It keeps the cognitive juices flowing which something we all need!

Will the Other Players Make Fun of Me When They Find Out My Age?

For years I kept my age a secret in WoW.....until I learned that many of the people I knew were around my age, or even older!  In the last 5 or 6 years, I have noticed guilds that are strictly for older people, guilds like "Over Fifty, "Ancient Artifacts," and even one called "Old Farts!"  Older people that want to play WoW will be in a lot of good company.

So if you want try something new, maybe open a whole new world give WoW a try!  World of Warcraft is a subscription based game, which means that in addition to buying the game itself, you also have to pay a monthly fee of about $15, to access the game.  For less that a fast food meal, you get a whole month of great times!  You can get a free trial of the game and play up to level 20 to see if you like it, but I am confident you will!

Click Here to Try the Free Trial of World of Warcraft

The New Writer on the Site: Tracey Boyer 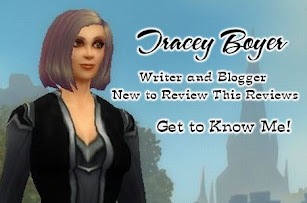 Welcome to my first post on Review This Reviews!  I am Tracey Boyer and I am very pleased to be here.  When I was approached to write for this site, I recognized most the names of the authors.  We have run in the same circles for years, and I have read their work.  Needless to say, I knew the site for it's quality and the writers for their experience and talent, so the decision to come aboard was not hard to make!

I have been writing off and on all my life, though the first time I ever made it a real job was on Squidoo.  It was the first time I actually made revenue from writing and opened my eyes to a whole new world.  In 2013 I started my blog, Homemade by Jade and branched out from there to many different kinds of writing.  I have written many places, but my favorites are:

Homemade by Jade Blog that centers around homesteading and self sufficent living, including recipes, crafts, gardening tips, sewing and other fun stuff.

Jade's Craft Shop - a shop that features only my own handmade items like handpainted wood signs,  plastic canvas items and handmade Christmas ornaments.

Patterns by Tracey - my shop of original plastic canvas patterns, designed by me, that are for sale.

Jadelynx Graphix - my website offering graphics services for blogs, Pinterest or other social media sites or articles, for business or personal use.

WebNuggetz - a site which has many authors that write on everything from soup to nuts!  I have about a hundred pages there on different topics that include recipes, shops of all kinds and reviews on a variety of products.  Written under the name Jadelynx.

A Bit About Me

I am a retired lady with many interests, one of which is writing.  I also love to garden, cook, do crafts and play video games.  My book and movie tastes are mostly science fiction, and I love animals.  These are probably the things you will see me writing about and reviewing.

I live out in the country with my husband, four ornery cats, five hens and a rooster.  We moved out here in 2016 to get away from the city noise and to be closer to nature.  It has been an eye opening experience for city folks, but we love it!

Email ThisBlogThis!Share to TwitterShare to FacebookShare to Pinterest Add to Flipboard Magazine.
Labels: About Me, About Us, Tracey Boyer
Older Posts Home
Subscribe to: Posts (Atom)