Review of the Mickey Bolitar Series of Young Adult Books 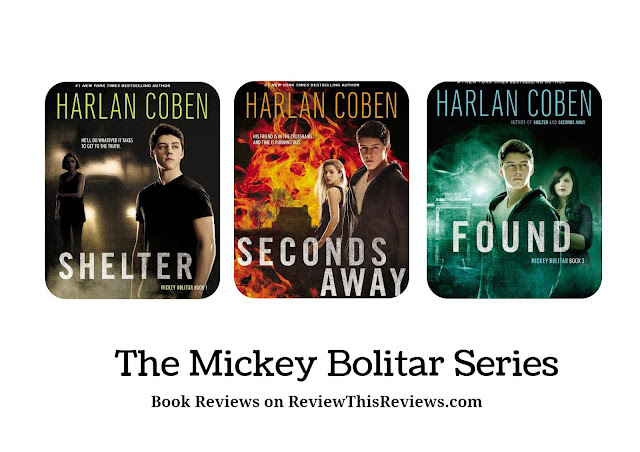 Mickey Bolitar is the teenage nephew of Myron Bolitar, first introduced in Harlan Coben's Myron Bolitar series.  This series of three books (to date) are in the Young Adult genre, and all of the main characters are teenagers. Thus it is written to appeal to teen readers.

Recently I have been reading (and in some cases re-reading) all of the Myron Bolitar series ~ in order. I reached #10 (Live Wire) and immediately went on to the latest book in the series #11 of 11 (Home). I spotted what I thought was a discrepancy between books #10 and #11 and felt that I must have missed one of the books, which would have explained the discrepancy.  After double-checking dates published, I realized that Harlan Coben had paused the Myron Bolitar series after writing Live Wire and written the three Mickey Bolitar YA books before continuing on with the Myron series. Thus I had a pretty strong feeling that what was missing was explained and solved in the Mickey Bolitar series.  I was right – and now I understand.

I am also delighted that I decided to read the Mickey Bolitar series, even though I don't normally read the Young Adult genre, because it turned out to be a wonderful written series and filled in a lot of blanks in the background of Myron Bolitar.  Settling once and for all (in my mind) that if you like and enjoy an author, it doesn't matter what genre he/she decides to write in, you will enjoy it just as much.

In Shelter, teenager Mickey Bolitar (first introduced in Book #10 of the Myron Bolitar series) has gone to live with his Uncle Myron because his dad had died and his mom was in rehab.

Forced to switch high schools, Mickey is a lonely and unhappy 15-year-old. Slowly he begins to make new friends (plus a few enemies of the group who always seems to make life miserable for the 'new kid' at school). He even acquires a new girlfriend, Ashley, and thinks perhaps his train-wreck of a life is beginning to improve.  Then ~ Ashley disappears!

Mickey is unwilling to let yet another person walk out of his life, so he follows Ashley's trail into a seedy underworld that reveals this sweet, shy girl is not who she claimed to be. And neither was Mickey's father. Eventually Mickey learns about a conspiracy so shocking that it makes high school drama seem ordinary.  What he finds out leaves him questioning everything about the life he thought he knew.

In Book Two, Mickey Bolitar, along with his loyal new friends—sharp-witted Ema and dorky, yet charming, Spoon—find themselves involved in a terrifying mystery

After the shooting of their friend Rachel.  Mickey now not only has to continue his quest to uncover the truth about the Abeona Shelter, the Butcher of Lodz, and the mysterious death of his father, but he needs to figure out who shot Rachel.

Mickey has always been ready to help his friends, but how can he protect them from a danger he doesn't understand when he's not even sure who – or what-- he's protecting them from?

Book Three in the Mickey Bolitar series sees mysterious clues continuing to surface as Mickey strives to uncover the truth about his father's death. Was it accidental? Murder? Or, is his dad still alive?

With the help of his Uncle Myron, along with his loyal friends Spoon and Ema, Mickey begins to unravel the mysteries of the Abeona Shelter and the elusive “Butcher of Lodz”.  At the same time Mickey tries to navigate the ins and outs of everyday life in high school and his dream of making the basketball team.

Mickey Bolitar is as quick-witted and clever as his uncle Myron, and eager to go to any length to save the people he cares about. Follow Mickey Bolitar on his action-packed adventures in Shelter, Seconds Away and Found.

With this Young Adult series, Harlan Coben introduces a whole new audience to his superb writing.

*The Mickey Bolitar YA Series review written by