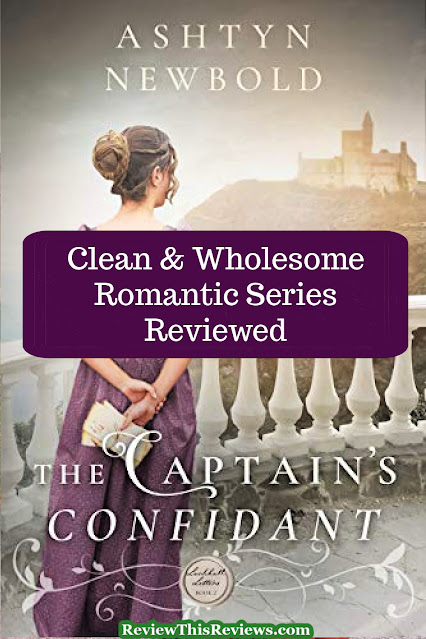 I previously reviewed the first book in the Larkhall Letters series. Because it was such a delightful book to read, I immediately started the second book in the series, The Captain's Confidant.

We originally met Bridget Northcott in book 1, The Ace of Hearts. I instantly liked her!  She was a gracious hostess, sweet friend, and clearly someone who could keep secrets.  In book 1, Bridget didn't even tell her brother, Matthew, Alice Rosemeyer's real reasons for visiting his estate, Larkhall.

When Bridget shared her own secret with Alice and told her why she wasn't interested in considering any would-be suitors, it is obvious why keeping confidences was so important to Bridget. She had a big secret of her own!  For years, she had been in love with her brother's friend, Captain Colin Foster.

Any romantic reading the book would hope that Bridget's captain returned her love. However, at the beginning of book 2, when we discover that Captain Foster is engaged to someone else, that hardly seems likely.

The Captain's Confidant: A Regency Romance (Larkhall Letters Book 2)Check PriceWhen his older brother dies in an accident, Captain Foster is forced to return home and assume his place as heir and master of Thorncarrow.  Colin resents having to leave his career and his beloved sea. He has been living the life he wanted.  Now, he is choked by obligations, debt, and an unwanted estate. Captain Colin Foster is a very unhappy man.

When they find out that Colin is back at Thorncarrow, Matthew and Oliver Northcott make plans to visit him.  They hope they might be able to help him ease into his new role as owner of an estate. Plus, they are interested in how he had so quickly become engaged to their neighbor, Miss. Tabitha Terrell.

Bridget is heartbroken to hear of Colin's engagement and questions how he could even consider marrying Tabitha. He knows firsthand of the spiteful things that Tabitha did to Bridget when they were kids. She is determined to find out how he could possibly love her and convinces her brother, Matthew, that he should allow her to accompany them to Thorncarrow.  However, upon arrival, is seems Colin is not thrilled to see Bridget. He sends her and her companion to stay in the dower's house with his mother.

In her own state of distress, Bridget decides to vent her anger through a letter that is never meant to be delivered.  However, a maid finds the letter and promptly takes it to the addressee, Captain Colin Foster.  After Colin reads the letter, he decides to write one of his own and that is how Bridget becomes the Captain's confidant.

Sharing secrets with someone you trust is something we all need to be able to do from time to time. Knowing they would never betray you is paramount.

This is a sweet story of an old friendship that is reestablished after years of separation.  It is also the story of forgiveness and reconciliation of other broken relationships.  No doubt, there is a message of encouragement laced within the pages of this story for all of us if we take the time to reflect upon it.