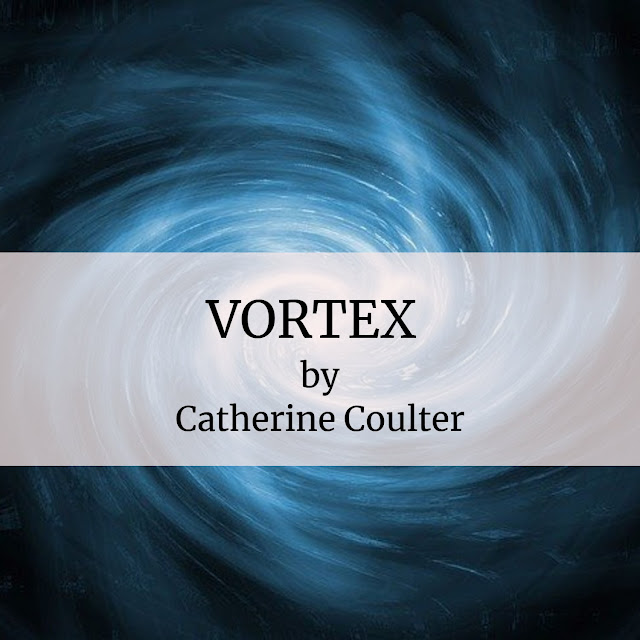 Vortex is the latest book in best-selling author Catherine Coulter's FBI series. Her favorite characters, husband & wife FBI team Savich & Sherlock, once again embark on solving a case. Usually, they work together on a case, but this time there are two cases demanding their attention in two different cities.

Dillon Savich deals with one case in Washington DC. A CIA Operative, Olivia Hildebrandt, is nearly killed while on a mission in Iran to exfiltrate a betrayed undercover operative.  But by the time she is released from Walter Reed Hospital, her team member, Mike Kingman, who saved her life, has disappeared, along with a critical flash drive the undercover operative was carrying.  While Olivia worries about her teammate, she is convinced he has a very good reason for not bringing the flash drive directly to CIA Headquarters.

When Olivia is attacked on her first night home, the FBI becomes involved.  Savich suspects that the strike is a direct result of the compromised mission and the missing team member and flash drive. The question is ~ who betrayed them?

Meanwhile, Sherlock is in New York City, first helping to deal with a triple homicide, then working with an investigative journalist covering the political scene in NYC. The journalist, Mia Briscoe, has discovered old photos taken the night seven years ago at a frat party where a fire broke out and her best friend Serena disappeared.  Serena was never seen nor heard from again. Mia recognizes someone in those photos and begins to uncover a sinister string of events going back to that disastrous party. As the secrets begin to unravel, some very powerful and dangerous people will do anything to keep Mia and Sherlock from learning the truth.

Catherine Coulter is known for her contemporary suspense stories and her popular characters FBI Agents Sherlock and Savich.  This brilliant new novel is her latest (#25) in her FBI thriller series.