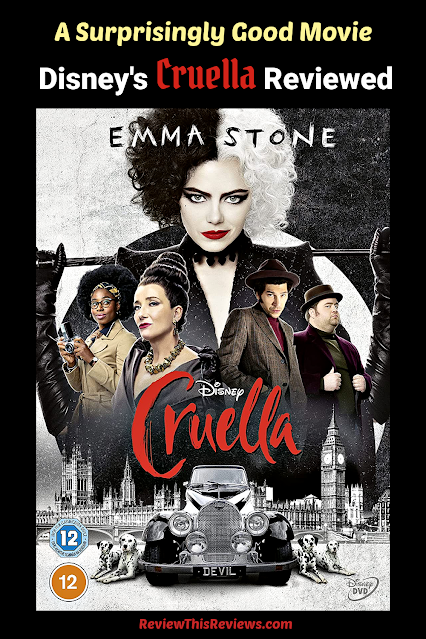 Disney's Cruella is a pretty good movie and surprisingly one I would recommend.  However, if you try to compare the "new" Cruella with the original 101 Dalmatians Cruella De Vil character, it doesn't quite match.

One could claim that the new Cruella ages to more closely resemble the original Cruella, but it would be hard to believe she could go from caring for the dalmatian dogs to wanting to kill 99 puppies to make a coat for herself.  Granted, this new Cruella doesn't claim to love the 3 dalmatians she has stolen, but she doesn't show any desire to kill them in order to quickly gain what she wants.

Frankly, she would be more likely to kill 3 dogs in order to reclaim a family heirloom that one of them swallowed than she would be to kill 99 for their valueless fur.

Do I recommend Cruella?  Yes, I do.  It is a good movie for adults.  Just don't expect this Cruella to resemble (apart from looks) the Cruella De Vil of 101 Dalmatians.  After all, the original character was basically named a derivative of Cruel Devil for a reason!

Baron von Hellman was elated to find out his wife was expecting, but Baroness von Hellman was extremely displeased and flew into a rage.  When Estella was born, the baron was out of town which allowed the baroness the opportunity to hand her child off to her valet, John, to be disposed of immediately.  She did see the baby long enough to know she was born with half black & half white hair.

John simply could not kill a baby so he gave her to a sweet maid, Catherine Miller, who he knew would care for her.  Catherine left Hellman Hall that very night with Estella and claimed her as her own child.

After the loss of his child, the baron grieved himself to death.  However, the tyrannical baroness lived on to thrive as a renowned haute couture designer.

Disney's Cruella DVD or Blu-ray [2021]Check PriceEstella, nicknamed Cruella, is opinionated, rebellious and strong-willed. Most of the other kids don't like her and she doesn't hesitate to get into physical fights with them, including the boys. When Estella is expelled from school, Catherine needs money to move to a new city, a new school, in order to start over.  She turns to Baroness Von Hellman for aid, but ends up dead instead, leaving Estella orphaned and living on the streets.

Estella is befriended by Jasper and Horace who teach her how to survive as a pickpocket.  They become the only family each one knows.

With a keen eye for fashion and the ability to create exceptional designs, Estella desires to work in the fashion industry.  Jasper & Horace help her get her foot in the door of the fashion world.  However, when that desire is overshadowed by a need for revenge, the boys aren't quite sure how far Estella will go or if they should help her get what she wants this time.

The Disney movie, Cruella, is chock full of fabulous actresses and actors.  Emma Stone is exceptional as Cruella, but she is not the only outstanding actor in this movie.


By the way, Cruella 2 is already in the works and both Emma Stone and Emma Thompson will be among those cast for that movie.