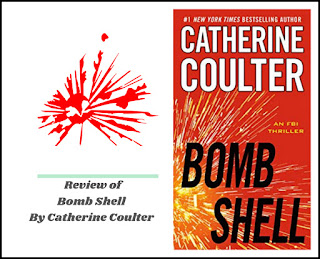 Catherine Coulter has written 23 books in her FBI series featuring Dillon Savich and his wife & partner Lacey Sherlock. A few years ago I introduced you to a new series of crime thrillers by Catherine Coulter staring American-born, UK-raised Nicholas Drummond, a tough chief detective inspector with Scotland Yard in my review of “The Final Cut”. Little did I realize that a Savich/Sherlock mystery thriller written just before “The Final Cut” gives us hints within the story of this upcoming 'A Brit in the FBI Series'.

Having just finished reading this book, Bomb Shell published in 2013, I would like to review it for you now.


Throughout Catherine Coulter's FBI series with Savich & Sherlock, we are introduced to other regular characters who are sometimes introduced in one book and reappear in subsequent books. One such character is FBI Special Agent Griffin Hammersmith whom we first met in "Backfire”. Griffin was working in the San Francisco office and aided Savich and Sherlock in solving a crime. Savich sees something special in Hammersmith and recruits him to join his unit in Washington, D.C.

While on his way cross-country to his new assignment in D.C., Griffin plans to visit his sister, Delsey, who is a student at a School of Music in Maestro, Virginia. Before he gets there, a phone call tells him that Delsey has been found naked and unconscious, lying in a pool of blood that isn't hers. No one knows whose blood it is, but Griffin knows he must protect Delsey. But from whom?

Meanwhile, back in D.C., the FBI, headed by agents Savich and Sherlock, is called to the scene of a murder, a body lying naked and frozen on a bitter winter day at the foot of the Lincoln Memorial.  The victim turns out to be the grandson of a former Federal Reserve Bank chairman. Is his death revenge against his grandfather for the banking crisis, or something personal?

With two crimes to solve, one in D.C. and one in Maestro, Virginia, will the FBI agents figure it out while coping with the cold and snow that is hampering their investigation? And, is Griffin Hammersmith really gifted with a unique ability to “see” how criminals think?

Catherine Coulter has written over 83 novels, 78 of which have been on the New York Times Best Sellers list.  Her FBI thrillers starring Savich & Sherlock now number 23.

Coulter ends Bomb Shell with the crimes solved and Dillon and Sherlock making plans to attend a showing of the Koh-i-Noor diamond at an opening gala of the Crown Jewels on display in New York City. This is her clever seg-way into the introduction of her new series starring Nicholas Dummond ~ The Brit in the FBI ~ in The Final Cut.

Both Bomb Shell and The Final Cut are excellent mystery thrillers, as are all of Catherine Coulter's books. There is drama and danger and bits of humor and touches of caring in all her stories, without any blood & gore or extreme violence. I think this is why Catherine Coulter has become such a popular author. I hope you will enjoy Bomb Shell as much as I did.