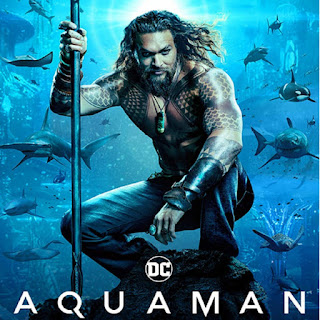 Hold your wild seahorses and prepare yourself for the latest, greatest DC Comic movie superhero, Aquaman!

Many of us are already familiar with Jason Momoa because of his previous leading roles in Conan the Barbarian, Braven and several other movies.  He has an impressive television series list of roles as well, which include Game of Thrones and more recently, his starring role as Declan Harp in the Netflix series Frontier.  As a matter of fact, I would go so far as to say he had a large established fan-base long before he was cast as Aquaman.  However, he is now and forever ingrained in our minds as the magnificent Aquaman and everybody knows his name!

Before I saw the movie, I was told that there were a lot of women who normally would never go see a DC Comic movie, who willingly volunteered to take their sons to this movie just so they had an excuse to go.  There was no need to worry.  There are plenty of adult women without children who love Aquaman.  It is not just a movie for children, or men.


Aquaman: Special Edition (2018) (DVD)Check PriceWhen a lighthouse keeper discovers an injured woman on the beach, he didn't expect the world to be forever changed.  However, that is exactly what happens when Thomas Curry discovers Atlanna (Nicole Kidman) washed up on his beach in Maine.

Tom has no way of knowing that Atlanna is actually the queen of Atlantis, the underwater kingdom.  He carries the unconscious female up to his lighthouse home with the intention of getting her medical attention.  When Atlanna awakens in the strange place, she has a strong reaction to the unusual noises around her, as well as the fish in his fish tank.

Atlanna and Thomas fall in love and Atlanna forsakes her father, her kingdom, her underwater tribe, and her previous commitments.  Sadly, they are not left in peace for long.

Soon after Atlanna gives birth to their baby, Arthur, members of the Atlantis army find her.  She realizes she must return to Atlantis, and to her previous responsibilities, in order to save the lives of Thomas and their son.


During his elementary school years, Arthur realizes he has special powers.  He can communicate with creatures of the ocean and they readily respond to him with fierce loyalty.  He also becomes acquainted with Nuidis Vulko (Willem Dafoe), a friend and confidante' of his mother, who was sent to train him to wield a trident and to fight.

Arthur discovers he can breathe underwater and swim like a dolphin.  He becomes a defender and superhero in the ocean, but he continues to live on land.  He is easily recognized by everyone, but he doesn't recognize or desire to claim his own birthright.

As the son of the queen, he should be king of Atlantis, but his half-brother sits on the throne and plots to be Ocean Master, ruler of all of the tribes of Atlantis.  He also has plans for land dwellers.

In case I forgot to tell you, I Love This Movie!

Aquaman was not previously as well known as some of the other DC Comic superheroes, but this movie has made his anonymity a thing of the past.


Other DC Comic Movies Reviewed on Review This!

Justice League Movie Reviewed
The Justice League superheroes unit to defeat Steppenwolf and his legion of parademons in order to save the world.