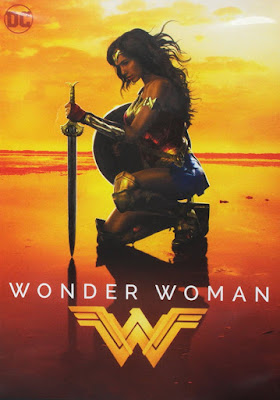 The new movie, Wonder Woman (2017), took me by surprise.  I didn't expect to like it.  As a matter of fact, ever since I saw the first preview for it in the theater, I have made comments about how no one could ever be Wonder Woman after Lynda Carter.  However, when my son gave me the DVD for Mother's Day, of course I immediately popped it into the DVD player for us to watch together.  I now freely admit, Gal Gadot is fabulous as Wonder Woman and I loved the movie.

I was a teenager during the Wonder Woman television series back in the seventies and I can easily remember how much the guys in school "admired" Lynda Carter.  Admittedly, her costume was too racy for me to want to wear, but everyone thought she was perfect.  In today's world, that Wonder Woman costume seems rather mild by comparison to many of the others that are made for women.

Speaking of the costume, the new costume design for Wonder Woman is pretty awesome.  It seems more appropriate for an Amazon warrior.  While it still has the corset bodice, it is designed to resemble armor.  The gladiator paneled skirt is definitely an improvement.  In my opinion, this costume does give Wonder Woman more credibility as a fighter instead of just a visual feast for men.

Wonder Woman (2017) -
Available on DVD, Blu-ray, Amazon Video, & MoreCheck PriceI loved the way this movie gave us the entire backstory on Diana, Wonder Woman.  If I ever knew it, I certainly didn't remember it.  That alone made the new movie worth watching.  I also appreciated the historical setting.  From the very beginning, we are able to identify the time period simply by the German insignia on the uniforms.  The soldiers wore the iron cross (WWI) instead of the swastika of the Nazi party (WWII).

After a few "current day" introduction scenes, we are transported back in time and to the island of Themyscira, homeland of the Amazon.  Diana's mother is the queen of the Amazons and she desires to keep Diana safe.  Defying Queen Hippolyta's orders, the queen's sister, Antiope, starts training Diana as a warrior.  Both women know Diana's true identity and purpose, but the queen wishes to protect her as long as possible.  Antiope wishes to prepare her for the inevitable.  When Hippolyta discovers Antiope is training Diana, she is furious, but after reasoning with her, Antiope convinces her that Diana needs to be trained for war.

When an airplane breaks through the barrier that separates our world from the island of Themyscira, Diana dives into the water to investigate.  She subsequently saves the pilot's life and brings him to shore.  Unfortunately, Steve Treyor's plane is followed by a warship and the first battle of the movie begins between the Germans and the Amazons.  Once the Germans are defeated, the women interrogate Steve.  By using the lasso of truth, they are able to quickly get information about "the war that will end all war".  Recognizing that humanity needs her help, Diana volunteers to take Steve back and aid in the war against Ares, the god of war.  Together, Diana and Steve travel back through the separating barrier and to London.  "Wonder Woman" is determined to fight against darkness and evil, but Diana finds that isn't as easy to identify as she expected.

Wonder Woman (2017) is truly a wonderful movie.  I encourage everyone to set aside any preconceived notions about Wonder Woman and watch the new movie.  I think you too will be pleasantly surprised.


Other DC Comic Movies Reviewed on Review This Reviews!

Aquaman Movie Review
Aquaman, starring Jason Momoa, is a fabulous DC Comic movie! Aquaman is half man & half Atlantean, but he is the rightful heir to the throne of Atlantis. It is his destiny to ensure peace between the Atlantis kingdoms and humans.

Justice League Movie Review
The Justice League superheroes unit to defeat Steppenwolf and his legion of parademons in order to save the world.