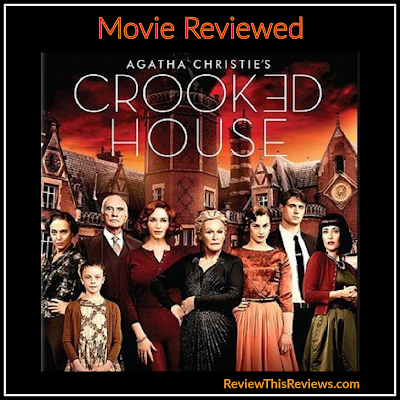 As always, Agatha Christie held me spellbound until the very end.  I had no idea who the murderer was and the ending was completely unexpected.

I don't know how I previously missed seeing one of the movie versions of Crooked House.  Apparently, there have been several.  I was thrilled to discover an Agatha Christie book plot that I had neither read, nor seen a film adaptation of the story.

If you love a great mystery, if you are an Agatha Christie fan, or if you happen to be seeking a wonderfully suspenseful movie, I highly recommend Crooked House.   I don't know about any of the other movie versions, but I do know this 2017 version is phenomenal and Glenn Close is superb as Aunt Edith.

The Plot of Crooked House by Agatha Christie 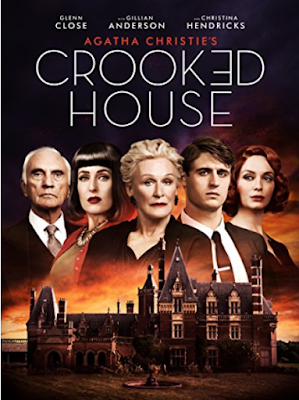 When Aristide Leonides dies at the age of 85, every member of his family and household are murder suspects.  He was extremely wealthy and each family member had reasons why they would want him dead.  Since they all lived together in his mansion, they all had opportunity and access to his medicine, which was mixed to create a lethal poison.

The family was not sad over Leonides death.  In some ways, it was a relief to several of them because he was a controlling patriarch who enjoyed playing games with their lives.  He used his money and their dependence upon him, to wield power over them.  Now, they were free from the overbearing, oppressive bully in their lives.

Everyone thought they knew what would happen to his estate in the event of his death, but they were all wrong.  Unbeknownst to his sons, his grandchildren and his first wife's sister, Leonides had neglected to sign the will that left them all heirs.  Because there was no legal will, his young wife stood to inherit everything by default.

Even before they knew about the unsigned will, family members were not particularly fond of his wife and they were more than willing to cast the blame for his murder on her.  Even the police suspected that his wife, Brenda, and her lover had poisoned Leonides.

As you would expect, Brenda did not like the family either and was thrilled to find out she would inherit everything.  She did not hesitate to show her happiness over this turn of events.

Leonides granddaughter, Sophia, hired her previous lover, who also happened to be a private detective, to investigate the murder.  She worries that Scotland Yard will not be respectful of the families privacy and she wants Charles Hayward to protect them from unnecessary probing.

You now know the basic plot.  Two sons, two daughters-in-law, three grandchildren, a sister-in-law, a young wife and her lover all living in the same house, who all have means and motive to kill the head of the family, Aristide Leonide.  Scotland Yard is even depending on Charles Hayward to figure out which one is the murderer.  See if you can figure it out before the last 10 minutes of the movie!

Glenn Close stars as Edith de Haviland in Crooked House.  As always, she is fabulous.  I can't imagine any other actress ever coming close to her performance.  She was totally and completely believable as Aunt Edith.

Edith was Aristide Leonides sister-in-law by his first marriage.  Therefore, she was his children's aunt and his grandchildren's' great aunt, but they all call her Aunt Edith.  She is a bit eccentric, self-assured, intelligent and strong willed.  I loved her!

In my opinion, Glenn Close as Edith made what is clearly a wonderfully suspenseful book plot into a phenomenally superb movie.