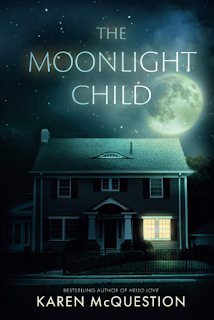 Things just aren't adding up.  Late one night, while out on her patio watching a lunar eclipse, Sharon spies what appears to be a very small child washing dishes in the kitchen of the house across her back yard fence.  How can that be?  The neighbors don't have a child that young.  And even if they did, why would she be doing dishes hours past her bedtime?

Perhaps it is nothing, but what if it isn't?  Sharon Lemke finds herself wondering if her imagination is merely running wild.  Soon, though, when Niki, an eighteen-year-old who has recently aged out of the foster care system comes to live with her, Sharon's concerns become shared.

As it has been said, it takes one to know one, and Niki knows plenty about what it means to be endangered.  The clues are pinging Niki's internal radar system.  She isn't willing to leave things to chance if there is a child who may be at risk.

Though Sharon has followed proper channels (notifying the appropriate social services authorities about the unusual circumstance next door), bureaucratic wheels often turn much too slowly for those fearing the worst.

Niki and Sharon decide to take matters into their own hands.  Can they pull off a clandestine investigation without endangering themselves or others?  Is there something sinister at play here? What will happen if they are caught in the act of spying on neighbors who may not be what they outwardly appear to be?

For me, an exceptional book is one that makes me care.  I was all in shortly after being introduced to Sharon, Niki, Mia, Jacob, and Griswold.  There was so much to love about the redemptive moments.  Of course, there are individuals you will likely despise.  Every powerful story needs that counterbalance.

I came away from this read thinking about the people who pay attention when they feel something isn't right.  Not only that, I reflected on the difference between those who act on their intuition and those who do not.  This story drove home for me the necessity of being a noticer who actually does something for the lost and the unseen individuals of the world.

I highly recommend The Moonlight Child by Karen McQuestion.