Are you a fan of mysteries? Mystery movies? Mystery books? Intrigue mixed with non fiction? Then Murdoch Mysteries is in your lane. 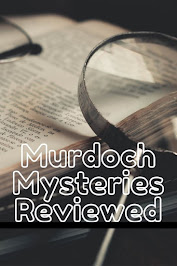 What Is Murdoch Mysteries?

Murdoch Mysteries is a Canadian television series which is in its' 14 season. The series is based on the novels of the same name by Canadian novelist Maureen Jennings. The star of the show is a police detective named William Murdoch working cases Toronto in the 19th and 20th centuries.

Hence the episodes are education, informative and entertaining which makes for very interesting viewing. Wonder how the old school fax was developed? Sonar? Fingerprinting? The series also incorporates real people of that era from politics to science to inventors to educators; names you will find very familiar.

There is a reason Murdoch is in its' 14th season and I am happy to have discovered this series upon the recommendation of a friend. Perfect for binge watching and even happier I discovered the entire series is available to stream without cost (see below!)

Where To Find Murdoch Mysteries

Amazon offers the series through Amazon Prime, but at a cost per episode.

My best find when researching where to find Murdoch Mysteries is Hoopla. Hoopla is a free digital service offered through your local library. I reviewed Hoopla here; my complimentary Hoopla subscription allows 20 borrows per month. However, due to the amount of increased interest of their viewers in the past year Hoopla has been offering Hoopla Bonus which allows additional borrows per month without counting those borrows toward your monthly limit.

Murdoch Mysteries is currently airing its' 14 season and bonus! Hoopla offers the prior 13 seasons to borrow and enjoy.