Every year Canada's Broadcasting Corporation or CBC as it is more commonly known, releases a short list of five Canadian books. It's a battle of the books competition in which the five books are brought forward by five Canadian celebrities and in March they come together over five days to debate the merits of the books eliminating one each day. On the final day, a winner is proclaimed the book that we should all read.

I thought I would give you a brief review of the Canada Reads program and the books that were nominated this year. It was interesting to learn a bit about each of the books and consider adding them to my reading list. Obviously since I have not read them, I cannot personally vouch for them though I can give you a brief description, share the official Canada Reads book trailers, and, at the end, tell you the name of this year's winner.  I might help to know that these books have often been nominated for other literary awards.

Here we go, the nominated books for 2021 under the theme 'One Book to Transport Us'. 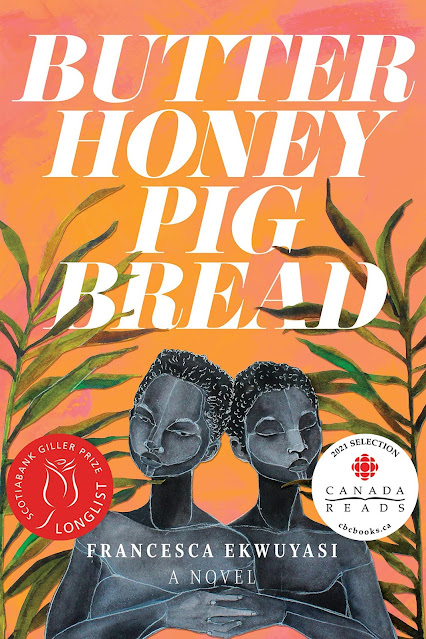 Butter Honey Pig Bread transports the reader from Lagos to London to Halifax. It is the story of three generations of women from Nigeria, a mother and her estranged twin daughters. The mother "believes that she is an Ogbanje, or an Abiku, a non-human spirit that plagues a family with misfortune by being born and then dying in childhood to cause a human mother misery. She has made the unnatural choice of staying alive to love her human family but lives in fear of the consequences of her decision." This book is about food and family and forgiveness, about choices and consequences, and about friendship and faith.

Writing on The Suburban author Meredith says that this book "ended up being her personal favourite to win the 2021 competition. It was a book that she simply didn’t want to put down and a story that she didn’t want to end."

TWO TREES MAKE A FOREST: IN SEARCH OF MY FAMILY'S PAST AMONG TAIWAN'S MOUNTAINS AND COASTS 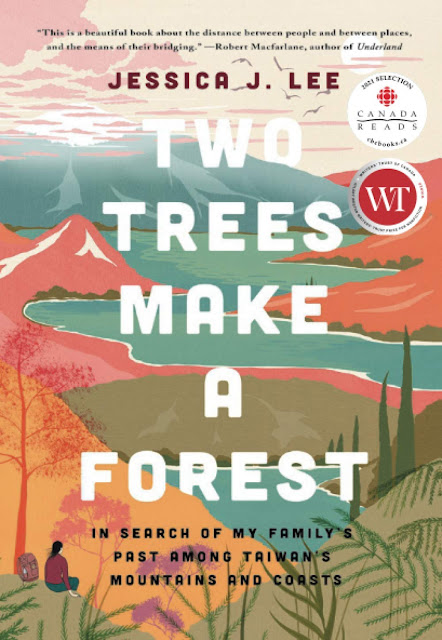 Two Trees Make a Forest transports the reader to Taiwan and is a book about memory, love, and landscape, about finding a home, about the distance between people and places and how they meet.

The author uncovers letters written by her immigrant grandfather that take her from Canada to her ancestral home in Taiwan where she searches for her grandfather's story while learning about the land that he grew up on. She hikes and bikes and swims. She learns about the mountains and the flatlands, the flora and the fauna. She discovers the similarities between natural stories and human stories that created her family and this island. The book is about the world of nature but it also looks at the colonial exploration of Taiwan. It "encompasses history, travel, nature, and memoir."

The reviewer on Bomb says, that this book is "A remarkable exercise in careful attention, be it to the nuances of language, the turns of colonial history, or a grandfather’s difficult-to-read handwriting, Two Trees Makes A Forest is a moving treatise on how to look closely and see truthfully, even as the fog rolls in."

THE MIDNIGHT BARGAIN BY C.L. POLK 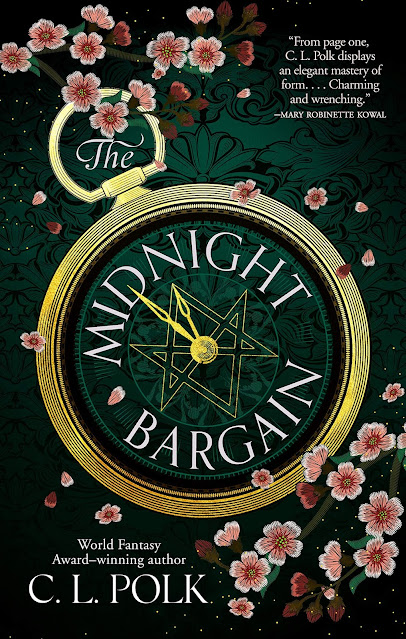 The Midnight Bargain transports the reader to Regency England. It is a fantasy novel set in a world that looks like Regency England where women must give up their ability to perform magic when they get married. Obviously, this means that you have something else to think about when you are a mighty sorceress and aspire to be the best female magician. In this book the main character wants to be come a full Magus and continue pursuing magic like men do but her family needs her to be a debutante during Bargaining Season and marry to save them financially. She finds the key to becoming a Magus but it is twisted up with the brother of a handsome, compassionate, wealthy man. The question becomes, will she become a Magus and ruin her family or will she marry the man she loves and give up her magic and identity?

Colleen Mondor on Locus says, "The witty exchanges are indeed sparkling and the verbal cuts are of the sharpest varieties. Polk is so clearly in her element that readers will be carried away by the sheer radiance of her smartly crafted prose and, like me, sorely miss Beatrice when they make that final and satisfying turn of the page."

Here's the official Canada Reads trailer for The Midnight Bargain:

Find The Midnight Bargain on Amazon by clicking right here. 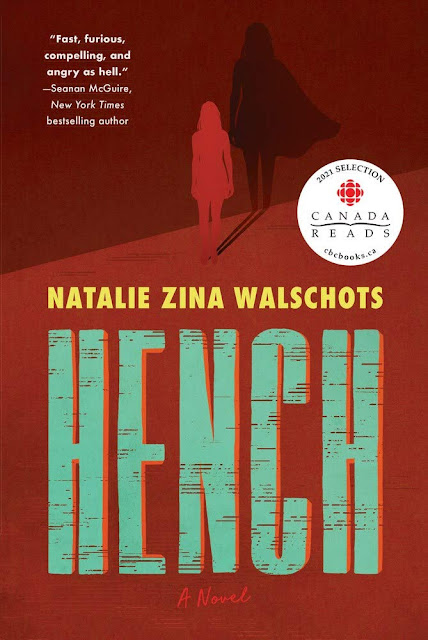 Hench transports the reader to the world of superheroes and villains. As a young woman working as a temporary office employee, she finds a great job as a hench. Howver, things go wrong, the hero leaves her injured and she gets laid off. Using her internet prowess, she finds out that what happened to her is not unique and when she shares her story, she no longer feels powerless. She discovers that the differences between good and evil may boil down to marketing, which she knows how to manipulate. When she is once again employed, albeit this time to one of the worst villains out there, she discovers she could save the world.
This book is a novel of love and betrayal and revenge and redemption. It is a look at the cost of justice via "a fascinating mix of Millennial office politics, heroism measured through data science, body horror, and a profound misunderstanding of quantum mechanics."
The readers on Amazon gave this book a 4.5 out of 5 and the readers at Goodreads gave it a 4.15 out of 5.
In the promotional information about the book, Seanan McGuire says "Hench is fast, furious, compelling and angry as hell." On NPR, Jessica P. Wick says, "Although the author tackles serious issues like how women are treated in the workplace, or how friendships might splinter under the weight of fear, Hench is steeped in the glorious campiness of Golden and Silver Age superheroes. There are lava guns! Mind control devices! Costumes! Lairs! Supercars! Awe! Names like Doc Proton, the Accelerator, the Tidal Four, Electric Eel, the Cassowary, the Auditor. It's fun. It's emotional. It feels like a friend. But it's not comforting. I think it might be terribly honest, and I honestly can't wait to see what Natalie Zina Walschots does next with the genre."
Here's the official book trailer for Hench:
Find Hench on Amazon by clicking right here. 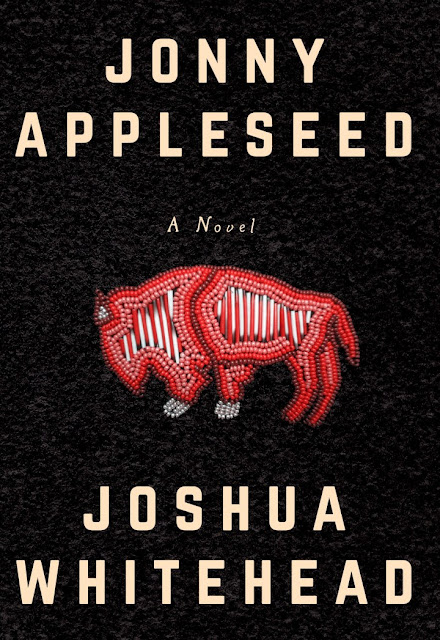 Johnny Appleseed takes us to the world of an Indian glitter princess. Our main character is trying to forge a life off of the reserve in the big city and becomes a cybersex worker in order to survive. He has to go back to the 'rez' and his former world for the funeral of his stepfather. What follows are seven days. Seven days full of stories that include "love, trauma, sex, kinship, ambition and heartbreaking recollection of his beloved grandmother." As he readies to return home, he figures out how to put together his life in this look at "First Nations life which is full of grit, glitter, and dreams."
Amazon reviewers give Johnny Appleseed a 4.3 out of 5 and reviewers on Goodreads, a 4.1 out of 5.
The Globe and Mail says, "Despite its often serious subject matter, Jonny Appleseed is a very funny book, in the same way that Indigenous people themselves are often very funny despite our traumas. In that way, reading this book felt to me like home. Every line felt like being back on Six Nations, laughing with my family, even though I was in my apartment in Brantford. With its fluid structure and timelines, Jonny Appleseed creates a dream-like reading experience – and with a narrator as wise, funny and loveable as Jonny, it’s the sort of dream you don’t want to wake up from."
Here's the official book trailer for Johnny Appleseed:
Find Johnny Appleseed on Amazon by clicking here.

AND THE WINNER IS...

After five sessions of debate that you can watch on CBC by clicking right here, the panel voted Johnny Appleseed as the winner. In my mind, though I have yet to read any of these books and they may not all appeal to everyone, these books are all winners in their own ways.
Here is the highlights reel from the five debates. It gives a further insight into each of the books, into the passion behind the individual presenting the book and into the varied and interesting stories written within.
That's it. The 2021 Canada Reads book list. There are a bunch of books here that I would never have picked randomly but some of the storylines and some of the reviews from other individuals have left me thinking that I might read them. How about you? Are there any books on this list that you find intriguing? Any that you have read?
See you
at the bookstore!
Brenda
Treasures By Brenda
QUICK LINKS:
Watch all of the CBC Canada Reads 2021 videos. 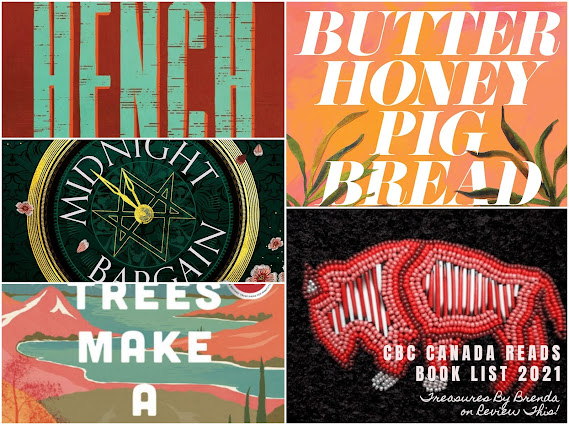