The Governess of Penwythe Hall (The Cornwall Novels - Book 1) Reviewed 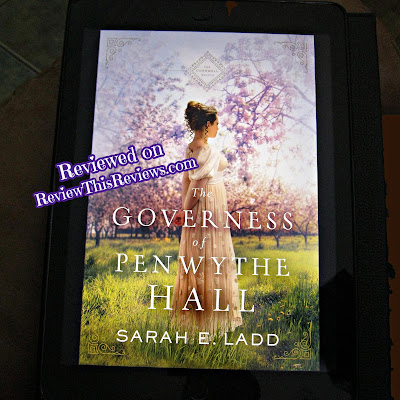 I recently started reading the Cornwall Novels by Sarah E Ladd and thus far, I have really enjoyed all of them.  The stories begin in Cornwall, England, 1811, which is a fabulous setting for historical fiction.
The first book, "The Governess of Penwythe", is an excellent foundation for the series. Delia Greythorne is the governess of five children, but she is more than just a governess.  She is the one constant in the children's lives.  When both of their parents die, they must leave their home and everything they are familiar with, to live with their uncle who they hardly know and do not trust. Unfortunately, returning to Cornwall is the one thing Delia never wanted. Her very life hangs in the balance.

The Governess of Penwythe Hall
(The Cornwall Novels) The opening scenes in this book are in Cornwall (1808) and Cordelia (Delia) Greythorne is leaving her home. Recently widowed, her husband's family not only blames her for his death, but believes she knows more than she is telling. Her mother-in-law follows her to the carriage and hurls final insults at Delia.  The Greythorne family has many secrets, all of which Delia knows, and that makes her a threat to them. They want her gone and perhaps would kill her if she didn't have valuable information they needed.
Delia starts a new life as governess to the Twethewey family in Easten Park, Yorkshire which is just far enough away from Cornwall for Delia to feel safe.
Randall Twethewey is a wealthy widower with 5 children.  When he is seriously injured in a horseback riding accident, he has a new will written.  Originally, his children were supposed to go live with his sister-in-law, Beatrice, but he worried that her husband would run through the children's inheritance.  With death pending, he decided to make his estranged brother, Jac, the children's guardian.  He also met with the children's tutor, Hugh Simon, and governess to pay them to stay with his children so they would have the two adults they depended upon and trusted so much with them throughout the transition into a new home with an almost unknown guardian.
While not as wealthy as his brother, Jac Twethewey owns Penwythe Hall, which was actually the reason for the breach between brothers.  As the oldest brother, Randall expected to inherent Penwythe Hall, but their benefactor left it to Jac instead.  Randall believed Jac had cheated him out of his proper inheritance.  Once you get to know Jac, you know he didn't cheat anyone out of anything.  Their Uncle Angrove simply believed Jac would be a better overseer of Penwythe Hall and left it to him.
Life as they knew it was about to change for everyone. None of them would remain untouched by the necessary move, including their unsuspecting Uncle Jac who had no way of knowing of his brother's death prior to the children's arrival at Penwythe Hall.
However, in Cornwall, their governess was most at risk.

Once You Have Read the First Book in this Series, You Will Want More!

The Governess of Penwythe Hall (The Cornwall Novels - Book 1) Reviewed by: