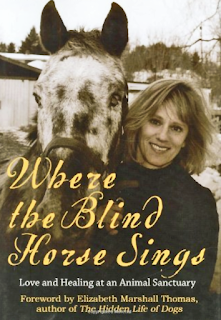 To be in a place of sanctuary is a true blessing.  To be the sanctuary that another individual needs, whether human or animal, is one of the greatest privileges in life.  To know beautiful beings who have helped transform others, and themselves in the process, is often the impetus for ordinary people to become extraordinary instigators of deep community, deep healing, deep peace, and deep joy.
Reading about Kathy Stevens, and her Catskill Animal Sanctuary (CAS), was more than enough to convince me that sanctuary is something that rescue animals gift to their extended human family.  Through a series of moving vignettes, Stevens illustrates the often unexpected intelligences (including emotional intelligence) that farm animals possess and use in relationship with one another and their humans.
Who knew that an ornery, previously mean cockfighting rooster could come to crave human contact (eventually choosing to sleep in bed with his rescuer)?  Paulie knew.
And what gives with Rambo (a former sheep terrorist known for inflicting bruises on the unsuspecting)?  When and how did he become the early alert system for animals in peril?  Was this altruism in action?
You will meet a fire survivor (Dino the pony), a duck afraid of water (Petri), a goat found wandering in Manhattan (Oliver), and a blind horse afraid to move even one inch (Buddy).  There will be pigs, cows, rabbits, and a yellow lab named Murphy.
Mostly, there will be love—the kind of love that enables animals and people to live in harmony with those much different from themselves (at least on the surface).
Where the Blind Horse Sings is a call to compassion.  It will speak to anyone who wishes to offer up sanctuary as her gift to the world.
Reading this may change the way you see animals and your relationship with them.  It is likely to cause reflection about the sensitivities, the emotions, and the personalities of animals.
Finally, for anyone at a crossroads in life, just as Stevens was before launching Catskill Animal Sanctuary, this book may raise the following questions: What do you love?  What do you do best?  What do you believe in?  What makes your heart sing?
Learning to move forward without fear made Buddy's spirit sing.  His story brought me to tears.  It also inspired me to move beyond those things that stood between me and my song.