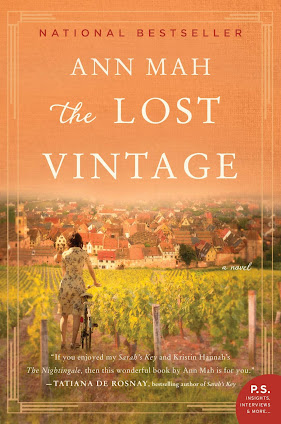 I've visited World War II Europe in my readings on numerous occasions in books like Cilka's Journey, The Girl They Left Behind and The Nightingale. This month I revisited the era via Ann Mah's 2018 novel, The Lost Vintage. I enjoyed the trip though of course, the situation was not always a pleasant one.

The Lost Vintage travels between current day California and France and World War II France, where one family did as best they could to survive the German occupation.

Living on a prestigious wine domaine in the Burgundy region of France, they managed for a while to avoid drawing attention to themselves by keeping their heads down but eventually they were drawn into the war in one way or another.

The mystery that drags the current generation down in the modern day part of the book is whether or not members of the family were Nazi collaborators or members of the resistance.  The idea that our ancestors were on the right side of history is an interesting one that cannot be true for all of us.

Because this book is well written, I had no problem switching back and forth between the different time periods. I was a bit less enthusiastic about the inclusion of the occasional French phrase, sometimes translated and sometimes not. I expect the French was included to give a French feeling to the book and translation is not necessary but I did find the practice intrusive.

As the back of the book says, this story contains a mystery, a love story and of course, a history lesson.  It is packed with French food, culture and of course, wine. It is well written and it is easy to read. If you enjoy historical fiction, wine and/or reading about France, I believe that you will enjoy The Lost Vintage. You may even find yourself needing to read "just one more chapter", wanting to drink a bit of wine and desiring a trip to France.

Without giving away the secrets of this book, I will mention that it deals with a little discussed part of the story of France. That is, what happened to French women when the country was liberated from the Germans. French women were often treated as traitors and found guilty without a trial by what was really mob justice. No allowances were made for varying situations like the difference between women who slept willingly with German soldiers and those who were raped.

This book comes HIGHLY RECOMMENDED by me. You can buy your copy of The Lost Vintage from Amazon by clicking right here.

See you
at the bookstore!
Brenda
More Reading:

The Ragged Edge of Night reviewed.

The Boy in the Striped Pajamas movie reviewed.

The Girl They Left Behind reviewed.