Why Is This Book So Popular with Children?

I first met Mr. Bear Squash-You-All-Flat when I was about seven. I was already reading by then, but Mom still read it to me. It had been a gift from my Cousin Edna, who was the first to read it to me. I liked the book so much I kept it. When my brother came along about three years later, both Mom and I read it to him as soon as he was old enough to understand it -- about three. He loved it and couldn't get enough of it. We had to read it over and over. The author, Morrell Gipson, has a real feel for what appeals to children. The illustrator, Angela, evokes just the right emotions with her watercolor paintings. 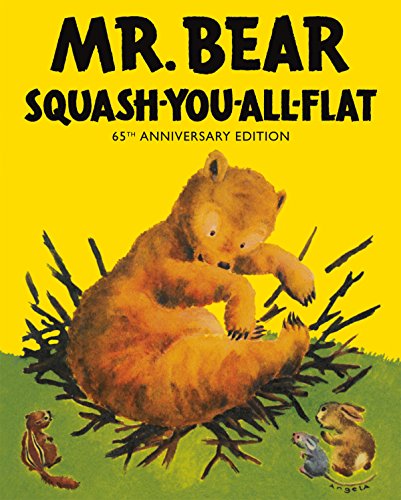 Mr Bear Squash You All Flat

Why do young children love this book so much when it might seem violent to an adult? Young children often feel small and helpless, just like the animals who watched Mr. Bear squash their houses. They can identify with those animals who run and hide when they see Mr. Bear coming toward their homes. Then they can rejoice when Mr. Bear gets what he deserves at the end of the book.


This book is full of the repetition that children love.  Adults can help them build anticipation by asking them what they expect to happen next. Adults can make the book for fun by imitating Mr. Bear's voice as he issues his warnings. By the time the child has heard the book read several times, the adult can invite him to repeat the warning with Mr. Bear. The adult can also ask children toward the end of the book what they think will happen when Mr. Bear tries to squash the tire house. Those are just my ideas. You will think of many more ways to interact with the child you read to.

Mr. Bear Squash-You-All-Flat got his name because he liked to squash things -- especially the houses of smaller animals. He was too lazy to build himself a house.

Most of the time Mr. Bear lived peacefully and didn't bother the other animals. He would sleep quietly under the trees since he had no home of his own. When the moon was full, though, all that changed. That's when he would get really grumpy and go on a house-squashing rampage and squash every house he saw. You can see how he does it on the cover of this book. (See it above.)

The edition I owned almost seventy years ago is out of print. I was happy to see this new edition bring it to new generations of readers. It has the same illustrations by Angela that I loved. Although they reveal Mr. Bear's grumpiness and anger, they aren't scary. Sometimes there is even a touch of humor. The artist does a great job on the facial expressions of all the animals. You can check out more of the book's illustrations on its Amazon page by clicking to Look Inside.

Whenever Mr. Bear decides to squash a house, he gives fair warning by stating who he is and that he intends to squash the animal's house after he counts to three. That gives the animal inside time to run away and hide. Then the homeless animal goes in search of another house. On the day described in this book, he squashes three houses. After each house he squashes, he feels less grumpy, and on this day he felt cheerful enough after squashing the third house to go take a nap.

Meanwhile, the homeless animals discovered a very large tire and moved into it together. They were quite happy there until after the next full moon when they saw Mr. Bear approaching their new house. The baby rabbit spotted him first and ran to warn the mouse and the chipmunk. They ran to hide behind a large oak tree, hoping Mr. Bear would leave their house alone. Not a chance! I'll leave it to your imagination what happens next.

Get Mr. Bear Squash-You-All Flat for a child you love now.