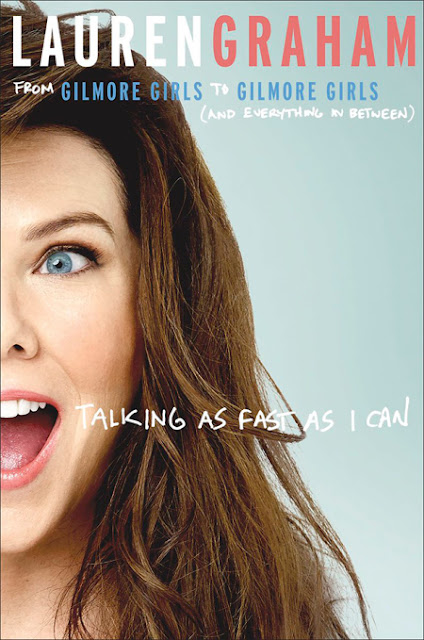 I don't ordinarily open a book review with a negative thought but that is how I felt when I began reading Lauren Graham's 2016 autobiography, Talking as Fast as I Can: From Gilmore Girls to Gilmore Girls (and Everything in Between.) I was disappointed. The book was not what I expected.

I should have known by ALL THOSE WORDS on the cover.

What did I expect? Well, an ordinary autobiographical book about Lauren Graham's life to date.

What did I get? A book that almost seemed to move as quickly as the dialogue on the Gilmore Girls.

According to Graham, The Gilmore Girls series featured some of the longest scripts in television history. While another television show script might have 50 pages, the Gilmore Girls were known to pack 80 pages of dialogue into their one hour less commercial breaks time slot. Yes, that means they talked almost non-stop. Verbal diarrhea comes to mind. Graham has actually been asked if she can talk normally.


It turned out that I also had a book in my hands that was not overly serious with paragraphs that were frequently disrupted by a witty comment from the author, which I could have done with out. Lauren Graham is a brilliant comedic actor but, at least at first, I would have preferred a more serious approach. I agree with Entertainment Weekly when they said that as an author Graham is "much better in the honest, earnest passages where she’s not trying to entertain us. We like her already!" 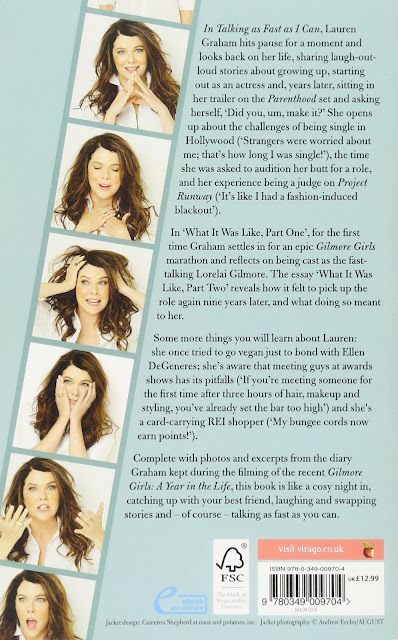 As Katherine on Women's Post said, it takes a while to get used to Graham's style, which is "conversational and as scattered as a Gilmore Girl." If you are a fan, you will know what that means. If not, well...carry on. Graham befriends you as she jumps from a thought to some song lyrics to a discussion on the telephone. "It’s through this writing style the readers are truly able to get to know Graham." Perhaps that is true.

Of course, it is helpful and the book makes more sense once you know that the book is meant to be a series of essays.


Yes, it is particularly if you are a fan of the Gilmore Girls and/or Lauren Graham and you approach the book in a less than serious manner. The book deals with Graham's childhood and adulthood through to the remake of the Gilmore Girls and it is interesting.  It is just not particularly serious. The back cover says that this book contains details about Graham's, "awkward growing up years, confusing dating years, fulfilling working years; and what it was like to be asked to play one of my characters again." I think that gives you a sense that this book treats Graham's life in a light manner.

I do like Lauren Graham and I will be checking out her novel, Someday, Someday, Maybe, which is about a young actress trying to make it in New York, a subject about which she definitely has firsthand knowledge. I would also like to revisit the Gilmore Girls series and watch the new movies though with seven seasons and four movies that is a whole lot of viewing! Meanwhile, you can find Talking As Fast as I can and Lauren Graham's other works on Amazon by clicking right here.

If you have read Talking as Fast as Fast as I Can, be sure to let us know what you thought.

Buy your copy of Talking As Fast As I Can here on Amazon. It's available in hardcover, paperback and ebook formats.
Read about Graham's co-star Alexis Bledel in my Sisterhood of the Traveling Pants movie review.
If you are a big Gilmore Girls fan, you might like to follow the Gilmore Girls News.