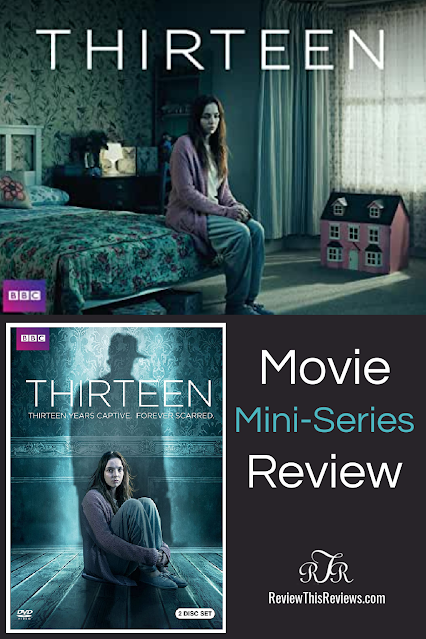 This is one of the best mistakes I have ever made!

I was searching Amazon Prime Video for a show I could watch while working on mundane site code.  I quickly clicked on the second season of a different tv series and the show started.  Not realizing I had inadvertently started a new miniseries, I keep thinking, who are these people?  But, soon it didn't matter because I was totally hooked on Thirteen.

Thirteen would not have been a series I would have selected intentionally.  Child abduction is a subject I try to completely avoid on tv, in movies, or even in books.  It is a parent's worst nightmare and even though my own children are grown, not knowing where my child is, not hearing their voice on a regular basis, or not knowing they are safe, still sends me into panic mode.

I said all of that because I want you to know that in spite of my own worst fears and horrors, Thirteen in one of the most riveting miniseries I have ever watched and I highly recommend it.


Episode 1 of ThirteenThe miniseries begins with a young woman, 26 years old, running from a house, finding a pay phone and calling the police.  She claims to be Ivy Moxam, an abduction victim who hasn't been seen in 13 years.  The police are skeptical because over the years two others have claimed to be Ivy.  However, after DNA tests, it is confirmed that this woman is in fact the girl who was kidnapped when she was 13.

It is immediately clear that Ivy is overwhelmed, insecure, scared, resistant to talk, and easily confused by too many people with too many questions.  This is understandable because she had been chained in a cellar for 13 years without any communication with the outside world.  Plus, her formal education had ended.  In many ways, she was still 13 years old.

Her stress and anxiety are only heightened when the police find the house where she was held all those years.  Because her clothes are found in her abductors' bedroom, the police don't know what to believe.  They question the validity of her story and press her for answers she can't give.  After all, the kidnapper is still at large and the police would really like to arrest him.

In the first episode of the series, we discover that several people's lives suffered collateral damage.  Her parents are separated, her father has a mistress, her best friend, Eloise, left town, and her boyfriend, Tim, has married, but is still haunted by the past.

The family strives for normalcy in order to give Ivy a secure, familiar home.  They are elated to have Ivy back home, but it is a time of readjustment for all.  Her father moves back in, hiding his secret from Ivy.  Her mother hurries to put things in the house back the way it was 13 years ago.  Ivy's sister was initially skeptical, but once the DNA test confirm her identity, she wants to help her sister.  She puts Ivy's needs above everything else, including her fiance.

In an effort to reclaim her life, Ivy contacts her old boyfriend and invites him over.  He doesn't have the heart to tell her he is married now.  His own confusion is clear as he struggles to choose between the past and his present.   Neither Tim, nor her family, want to do or say the wrong thing.  They simply want to protect her.

Ivy has only been home for a few days.  She is struggling to find her place, remember who she is or is supposed to be, reestablish relationships and survive the constant pressure from the police to help them capture Leonard, aka Mark White, her kidnapper.  That pressure intensifies exponentially when Mark abducts a 10 year old.


My Opinion and Recommendation of "Thirteen"


As I said in the the introduction, in only a few scenes, I was completely hooked on Thirteen.  Instead of having a tv show as background noise while I worked, I ended up setting aside my work and watching the miniseries.  I did not break between episodes.  I was so ingrained in the plot, that I watched all five episodes (5 hours) that night.

The girl who played the part of Ivy did such an extraordinary job that I found myself siding with her completely.  Her facial expressions alone conveyed a world of anguish and uncertainty.  I could easily believe she was Ivy Moxam, a child who had been abducted, mentally and physically abused for 13 years.

This miniseries does an excellent job of showing how people can be trapped in the past, yet somehow manage to live on.  How so many things change because we can't just stop the progression of time, but how we can instantly be thrown back into time by simply having someone from our past return to us.

From the very beginning, I was on Ivy's side.  I believed her and I believed in her strength of survival.  I was not disappointed in her final actions at the end of the 5th episode.  I believe you will definitely want to see this miniseries for yourself.