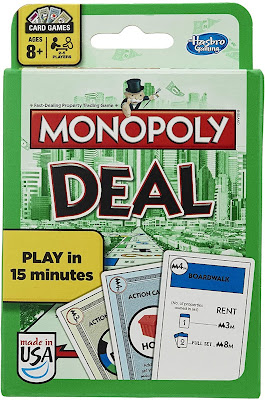 We are all familiar with the board game, Monopoly, which has been around in its current version since 1935.  Over the years, the classic version has grown to include nearly 1300 variations, many of them theme-based. For a list of these, check this link.

Monopoly has become one of the most popular games of all time. I remember spending hours playing it as a child, then with my own children, and now my grandsons enjoy it just as much. And now it is available in a quick version card game form called Monopoly Deal.


A Favorite Version of the Monopoly Board Game

While visiting my 14-year-old grandson, Ryan, in Iowa in June, we played his Star Wars Monopoly game in board game form, which he absolutely loves to play.

At the end of my visit, it was decided that Ryan would come back home with me for a visit to Coastal Georgia and the beach. He wanted to bring his Star Wars Monopoly Board Game, but there wasn't room in the car.  Instead, he discovered that there is a card game version of Monopoly, which he purchased before we left.

Let me tell you, Ryan and I have become very expert at this Monopoly card game, playing 3 and 4 games per day most days! This Monopoly Deal card game takes only about 15 minutes to play, as opposed to 3 and 4 hours to play the board game version of Monopoly.  And since it doesn't take up any more room to pack in your suitcase than a deck of cards, it is the perfect game to take on a vacation or trip.


Monopoly Deal comes with 110 cards consisting of the familiar Property Cards (like Boardwalk and Park Place), plus hotel and motel cards, money cards, and action cards which include rent cards and cards that let you steal property from the other players. 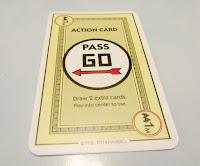 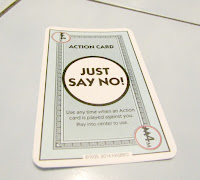 
Each turn you draw two cards and can play up to 3 cards. Fortunes can change in a minute, depending upon what cards you draw and play.  To win you need three complete sets of Property Cards.

The game can be played with 2-5 players, which made it perfect for Ryan and Grandma to play a quick game or two between trips to the beach or my apartment pool those hot summer days here in southern Georgia.  It's also a quick game to play between dinner and bedtime. The more we played it, the more we enjoyed it. It's truly an addictive card game. If your looking for a fun family/friend game, Monopoly Deal is it.