Review of a Tour of a Major League Baseball Stadium

If you are looking for an interesting place to take children on a tour, I would suggest a major league baseball stadium.  In July my granddaughters, age 10 and 12, were visiting us and it was a hot and sticky July summer in St. Louis.  I was looking for an interesting place to spend some time with them when someone suggested a tour of the baseball stadium.

Busch Stadium in St. Louis opened in April of 2006.  This huge stadium has seats for 43,975 people and offers a beautiful panoramic view of the downtown skyline.  Fellow Review This author, Pat, wrote about her visit to the stadium in this article.

I went online and found information about the tour of Busch stadium and was delighted to find out that tickets  included a tour of the stadium and a visit to the Cardinal Hall of Fame and Museum.

Our tour of Busch Stadium started just outside Gate 3 of the stadium.  This gate has a statue of baseball great Stan Musial just outside the gate and the entrance to the gate is a tribute to the Eads Bridge with a large bridge-like structure arching over the entrance.  The Musial statue is often a meeting place for fans coming to the ballpark.  Here is a photo of my granddaughters and myself by the statue.  You will also note part of the bridge entrance in the background. 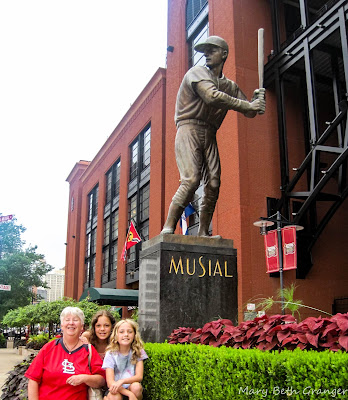 The tour of the stadium took about an hour and we visited The Redbird Club, the Champions Club, the broadcast booth and the Cardinal dugout.  Here are some photographs from each of those areas. 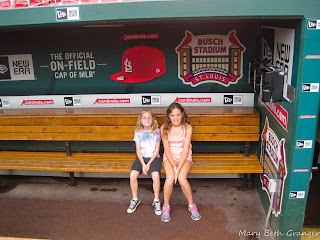 In this photo my granddaughters are sitting in the Cardinal dugout.  It was fun to sit where the Cardinals sit during the games.  It was also fun next time we watched a game on TV to say we had sat there too! 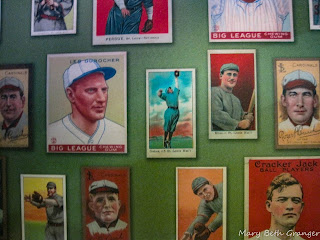 The Redbird Club is an area where fans can buy tickets and enjoy food in an indoor glassed area.  Their tickets also include seats in front of the area to view the game from outside.  It is a nice way to enjoy the game, but also be able to get in from the heat.  One of the walls in the club was very interesting.  It was covered with replicas of oldtime Cardinal baseball cards. 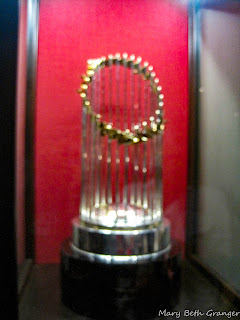 The Champions club is another indoor seating area.  In this club are several of the world series trophies that the Cardinals have won over the years.

Across from Busch Stadium is the newest dining and entertainment district in St. Louis.  This area houses several restaurants along with the Cardinal Hall of Fame and Museum.  The area is being built in stages and in the future there will be more retail along with a hotel and residential opportunities.  There will also be more parking.  Ballpark Village is a "happening" place to be, both during home and away games.  Many fans gather to watch the games on the big screen TV's and enjoy food and drinks in the area restaurants.  We stopped at Cardinal Nation and had lunch before we went to the museum.  We found the food excellent and very reasonably priced.  The photo below shows the girls in Ballpark Village. 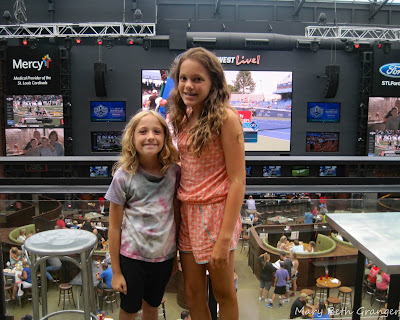 Cardinal Hall of Fame and Museum

The Hall of Fame and Museum has something for everyone.  This 8000 square foot museum is packed with over 16000 items of baseball memorabilia and thousands of archived photographs.  My husband really enjoyed looking over all of the memorabilia and the girls enjoyed some of the interactive displays.

Postcard from my Photograph

This postcard shows the St. Louis skyline from inside Busch Stadium. 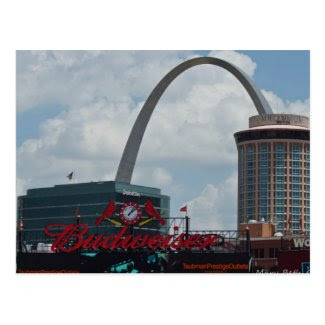