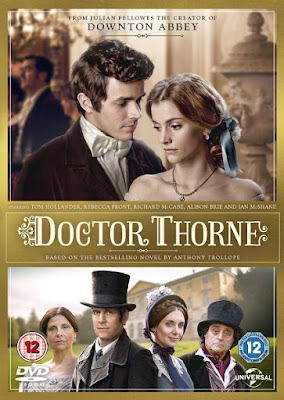 I confess, I am truly a hopeless romantic!  I prefer romantic novels and shows, including romantic theater productions.  I especially enjoy a story that isn't transparent.  While I always want the couple in love to end up together, I much prefer a plot that holds me captive until the end.

When I discovered the movie Doctor Thorne offered on Amazon Prime, I was quite intrigued by the brief description.   I also confess that I have a weakness for British historical dramas.  I love the settings, the scenery, the castles or homes, the gardens, the costumes, and the characters.  As soon as I read that the script was written by Julian Fellowes, the creator of Downton Abbey, I was hooked.

The movie is based on the novel that carries the same title.  The book was written by Anthony Trollope, an author that Julian Fellowes compares to Jane Austin and Charles Dickens.  A high recommendation indeed!

Since I was previously not familiar with the Mr. Trollope's work, I was rather excited to discover a new author as well as a new movie.

A Brief Synopsis of the Movie "Doctor Thorne"


Julian Fellowes Presents Doctor Thorne -
Trailer and Complete Movie on Amazon PrimeSet in England in the 1850's, the movie opens with Roger Scatcherd, a local stonemason, calling out Henry Thorne for his inappropriate behavior toward his sister.  The accused scoffs at Scatcherd and merely states that he "did not know his sister and honor were acquainted."   Roger Scatcherd grabs him and throws him to the ground accidentally killing him.

The movie immediately moves forward to 20 years later where we meet Henry Thornes brother, Doctor Thorne, who has raised his brother's illegitimate daughter, Mary.  She has grown up alongside the wealthy Gresham sisters and their brother, Frank.  Mary has previously been welcomed into their home, but when it becomes obvious that she and Frank are in love, his scheming mother, Lady Gresham, and aunt, Countess de Courcy. take charge.  It has been determined that Frank must marry into wealth in order to save their estate and Mary is certainly not wealthy.  They set out to find a suitable match for Frank.

Mary, herself, believes she is not worthy of Frank once she finds out that she is illegitimate.  It would be a marriage that society would not tolerate.

There are many layers to this movie as each character is more fully developed.  You really have to try to put yourself in the position of each person to understand them better.  As much as I wanted to hate Lady Gresham, I could actually grasp her desire to protect her son, her home and their place in society.


My Opinion of "Doctor Thorne"


It was a rainy Sunday afternoon when I went in search of a new movie to watch.  I viewed the entire series in about 3 hours.  As expected, Doctor Thorne was a movie well worth watching.  Now, I would like to read the book.  I feel quite certain that the author, Anthony Trollope, will spend even more time developing each character and go into much greater depth of explanation.

I found myself wondering why the movie was named "Doctor Thorne" when it focused on the love story between Frank, Jr. and Mary.  I also questioned how Roger Scatcherd became Sir Roger Scatchard, especially after spending a decade in jail.  I also wanted to know more about the relationship between Doctor Thorne and Frank Gresham Sr.  The basis of their friendship and trust for one another.

Even though I wondered about the title, those relationships and social positions, I still found the movie to be quite entertaining and spellbinding.  "Doctor Thorne" might not be as well developed or as lengthy as "Pride and Prejudice" starring Colin Firth, but it is definitely a movie I can recommend.  And, while Doctor Thorne might not be Darcy, he is wise, considered and admirable.