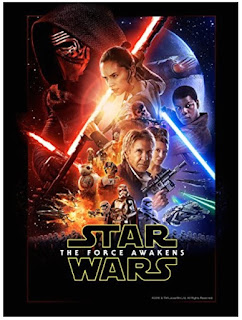 We recently went to see "Star Wars: The Force Awakens" and I was actually very surprised by how much I enjoyed the movie.  You see, I am a huge Star Wars fan.  The very first "Star Wars" movie came out when I was a teenager so you could say that I have grown up with "Star Wars".   Almost 40 years of Star Wars influence and I was not ready to let go of the original characters and embrace a new generation.

Daily, I am surrounded by Star Wars characters.  Yoda sits at my kitchen sink overseeing all my activities.  Darth Vader hovers by my the coffee pot and frequently speaks to me. Well when I push his little button, he speaks to me.  I also own a Ewok plush.  And to this day, Jabba the Hut totally grosses me out.  Oh, yes!  I even have Star Wars Christmas decorations.  Wanna see Yoda in a Santa suit?  Just come to my home next Christmas.

Star Wars: The Force Awakens Deluxe Figure Play SetBased on the trailers I had seen, It appeared that the new Disney made Star Wars movie was moving beyond my favorite things and characters.  I didn't think I could stand watching that happen.  When my son wanted me to go see the movie with him,  I decided spending time with him was more important than hanging on to the past.  However, I was in for a huge surprise!

Harrison Ford (Han Solo), Mark Hamill (Luke Skywalker), Carrie Fisher (Princess Leia) were back and even Peter Mayhew returned to play everyone's favorite Wookiee, Chewbacca.  I do want to make one note here.  There were actually two actors who played the part of Chewbacca in "Star Wars: The Force Awakens".  Joonas Suotamo stepped in to cover the action scenes for Peter Mayhew.

In addition to these fabulous actors who made the characters come to life in the original "Star Wars" movie nearly 40 years ago, "The Force Awakens" also included C-3PO and R2-D2.

Plus, the Millennium Falcon is back!

I missed Yoda, but otherwise it seemed like a wonderful reunion until the unthinkable happened.


If you are an old Star Wars fan, by now you already know that this movie takes place decades after the original confrontation with Darth Vader, but there is a new Dark Side, just as there is a new generation that is strong with the "Force" fighting for the Republic.

Sadly, just as Darth Vader was Leia and Luke's father, Kylo Ren is Leia and Han's son, Ben.  It seems to be a family trait to betray the Republic and move to the dark side.

We were never meant to like Darth Vader, and we most certainly do not like Kylo Ren.  The atrocity he commits to "prove" himself will forever define him as the greatest villain in the "Star Wars" series of movies.

If you are a huge original "Star Wars" fan, prepare yourself!  Things will never be the same again.

Star Wars: The Force Awakens Visual DictionaryMuch to my surprise, I really liked the way they tied the old with the new.  There does come a time in life to pass the gauntlet to the young.  To let them have their own generation of heroes and villains.  I have no doubt there are more revelations and surprises for the "Star Wars" future films.

I also really liked the new characters.  I look forward to seeing Rey, Finn and Poe Dameron take on this new generation of the dark side.  Plus, it appears as if we will be seeing a lot more of Luke Skywalker as he assumes the tasks of Jeti mentor and instructor.  I anticipate really liking the mature Mark Hamill, perhaps even more than I did when he was oh, so very young.

I assure you, I will cheer wildly when they finally take down Kylo Ren.  I await the day when his empty helmet sits next to the disfigured Darth Vader headpiece in a lineup that demonstrates that good will conquer evil even if evil rules for a day.


May The Force Be With You!