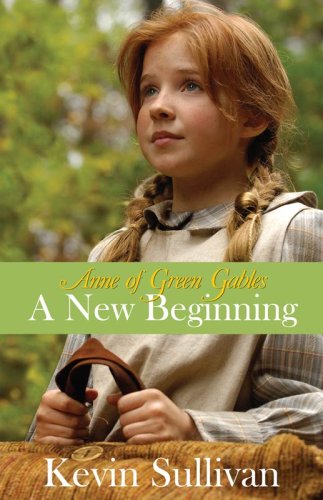 In the book Anne of Green Gables: A New Beginning, the war in Europe is winding down and Anne Shirley is a middle-aged writer returning to the island for a visit. Without thinking about it, she agrees to create a play to be performed during the White Sand Hotel's summer season. However, she admits that the play is just one way to try NOT to think about the recent issues - like her missing son - in her life. She discovers a secret at Green Gables which proves to be a distraction of another sort and she must look at suppressed memories and troubled years at the same time as she tries to write the play. She learns about her parents, her quest for kindred spirits and about her imagination.

Anne of Green Gables: A New Beginning is the unauthorized prequel to the book and movie, Anne of Green Gables. The book was adapted from Kevin Sullivan's televised screenplay which aired in October, 2008. Only recently did I discover that this book was available. I had heard and seen the television movie. The book seems to have been rather low-key and I am guessing you may have missed it, like I did.

Click here to order your copy of Anne of Green Gables: A New Beginning from Amazon.

Why Should You Read This Book?


Kevin Sullivan takes us where L.M. Montgomery did not...to the time in Anne Shirley's life before she was sent to Prince Edward Island. If you are a fan of this famous fictional character, you must be curious about Anne's life before she arrived on the Island.  You will also want to check out the authorized prequel, Before Green Gables by Budge Wilson.

Who Is Kevin Sullivan?


Kevin Sullivan is the writer, director and film producer of this story, Anne of Green Gables: A New Beginning. He is, however, very well known for his very popular, family-friendly period movies and televison shows, like the original Anne of Green Gables movie series, The Piano Man's Daughter, Road To Avonlea and Wind At My Back. He has won hundreds of awards, which include three Emmy Awards, a Peabody Award, a Prix Jeunesse and four Cable Ace Awards. He is also an author and his writings include Beyond Green Gables and Anne of Green Gables: The Official Movie Adaptation.

If you are interested in reading Anne of Green Gables: A New Beginning you can find it on Amazon here. When you've finished reading the book, you might want to watch the movie, which was originally broadcast in Canada in October, 2008. You can find it on DVD right here. They're nicely priced now so gifting them would make a lovely and affordable gift idea.

Discover the Anne of Green Gables items in my eBay store.

Before Green Gables Book Review Discover author Budge Wilson's version of what Anne Shirley's life might have been like before she arrived at Green Gables in Prince Edward Island.

Anne of Green Gables Books
Uncover a variety of styles of AOGG books.