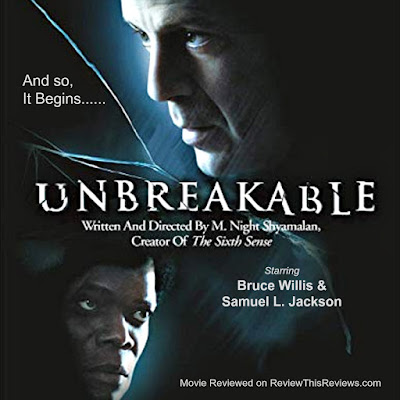 It is hard to believe that Unbreakable, starring Bruce Willis, was released almost 20 years ago.  Sixteen years later, Split was released which caused a resurgence of interest in Unbreakable.

At first, it isn't obvious what the two movies have in common other than the fabulous M. Night Shyamalan.  However, hang on until the last minutes of Split and you will understand what they have in common.  And, prepare yourself, there is a third movie, Glass, that ties them all together.

In this post, I'm only going to review Unbreakable and recommend that you plan to watch Split & Glass also.  However, I will tell you in advance, Split is a much harder to watch due to content.  Keep in mind though, these are categorized as "thrillers" for a reason.


UNBREAKABLECheck PriceWhat do you get when you combine M. Night Shyamalan, Bruce Willis, and Samuel L. Jackson?  A magnificent movie!

Samuel L. Jackson is Elijah Price, aka Mr. Glass.  The opening scene of the movie is the birth of Elijah.  The baby has both arms and legs broken.  Sadly, he has a rare bone disease (Type I osteogenesis imperfecta) that makes his bones break as easily as glass, thus his nickname.

As a child, Elijah resists playing with other kids.  Partly because of his disease and the fear of more subsequent broken bones, but also because he doesn't like being mocked.  In order to encourage his outdoor play, his mother starts giving him comic books as gifts for going outside.  It is no wonder Elijah becomes a comic book story and art expert.

Bruce Willis is David Dunn, a security guard that seems to have a sixth sense about people he touches, intentionally or inadvertently.  He also has another unusual trait.  One that even he does not acknowledge or recognize until Elijah Price points it out to him.  Elijah Price becomes suspicious of what makes David Dunn different when David is the only survivor of a train crash that killed all of the other 131 passengers.  Not only did David survive, he walked away from the crash with no injuries.

David's son, Joseph, adores his father.  He would rather spend time with him when he works out than to play football with friends.  Joseph is amazed, perhaps even mesmerized, by his father's physical strength.  When Joseph accompanies his dad on his initial visit with Elijah, he is intrigued by what Elijah has to say.  He can certainly see the possibility that Elijah may well be right.

Elijah has a theory that for every extreme, like his fragile bones, there must be someone of the opposite extreme that is unbreakable.  Elijah believes that person is David Dunn, and he befriends David for the purpose of proving his theory.  He likens their physical traits and limitations (or lack thereof) to comic book characters.  He encourages and challenges David to test his theory.

My Conclusion & Personal Opinion of Unbreakable


I don't ever wish to give so much information in a review, or synopsis, that I ruin the movie for others.  It is my desire to give you just enough information that you want to watch the movie yourself.

If you enjoy thrillers, I highly recommend Unbreakable.  As a  M. Night Shyamalan fan, I generally like all of his movies.  Unbreakable is one of my favorites.  However, I will warn you in advance, you will also wish to watch the subsequent movies, Split and Glass.  I will repeat my earlier caution about Split, it is much harder to watch, but clearly an excellent thriller movie.

M. Night Shyamalan is a master of suspense and unexpected twists.  I can easily state that he is one of the most exceptional writers, producers & directors of our time.  He doesn't simply remake an old movie or produce mindless drivel.  He actually writes a gripping story with psychological aspects, and produces excellence for the screen for those of us who enjoy intriguing thrillers without extreme gore.