Behind the Light of Golowduyn (A Cornish Romance Book 1) Reviewed 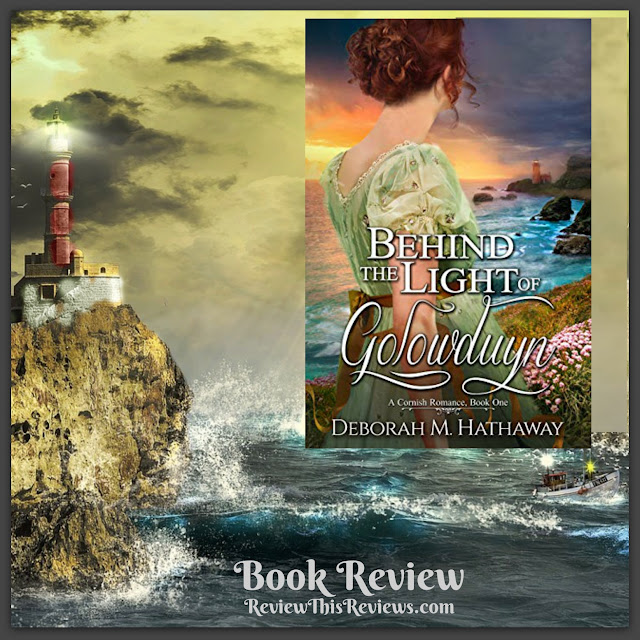 A Romantic Historical Fiction that I Could Not Put Down!

Behind the Light of Golowduyn certainly kept me spellbound. I do love to find a book that I simply cannot put down until I reach the end. This is the first book I have read by Deborah M. Hathaway, but it definitely will not be the last.

To start, I loved the setting of this beloved lighthouse that signaled danger of the cliffs to passing ships.  To a captain, the lighthouse is a light of salvation and survival.  A ship being tossed in a storm could end up being a pile of timber with a crew of dead men, surrounded by their worldly possessions.

It is the duty of the historical lighthouse keeper to tend the lights, keep the oil full and the wicks trimmed for the next lighting, and to keep the tower's glass clean inside and out.  It is the cleaning of the outside glass that presents the greatest danger for the lighthouse keeper since falling could be as fatal to him as the cliffs are to sailors.

For the lighthouse keeper, it can mean a lonely existence.  While his efforts are often greatly appreciated, he rarely hears the praise from the men on the passing ships, unless he has failed at his job and meets them face to face.


Behind the Light of Golowduyn Book Synopsis


When Abigail Moore was a child, she was taken in by her uncle, the keeper of a lighthouse.  He taught her to be his assistant and to help him tend the lighthouse.  Abigail loves Golowduyn, the lighthouse.  She prefers it to being in the city surrounded by people of society who are often cruel and harsh.  For Abigail, Golowduyn offers a safe haven of acceptance and peace.  She has been very happy growing up in her sheltered and protected world.

When her Uncle Ellis is hurt while cleaning the exterior windows, Abigail assumes the entire responsibility of tending the lighthouse, as well as caring for her uncle and their home.  Although she is overextended and often exhausted, she is more than happy to continue as the exclusive Golowduyn caretaker.  Then one stormy night, the very thing she has spent her life trying to prevent, happens when a ship wrecks.  Abigail races out into the storm in hopes of aiding any survivors.


On the Ship, Valour


Captain Gavin Kendricks is fighting to at least save the lives of his crew as it becomes clear that his ship is going to wreck into the cliffs of Cornwall, if it doesn't burn first.

As the captain, Gavin will be the last to leave the ship.  However, as he and his friend, Lieutenant Harris, are waiting for the lifeboat to return for them, they are hit by a wave and Harris is knocked into the water.  Certain that his friend will drown, Gavin quickly ties a rope around his waist and jumps.

On shore, Abigail sees the man fall from the ship through her telescope.  She can also see that the lifeboats are headed to shore, away from the ship and the man in the water.  Realizing they have no way of knowing anyone has fallen, she jumps into her own small boat, grabs the oars and heads directly for the man in the water, praying she will get there on time.  She is already distressed by the belief that she has failed this ship and it's crew.  Abigail has no way of knowing it was not her fault as the lighthouse keeper, that the ship has wrecked.

Time for You to Read the Book


I hope this book review has piqued your interest and you are ready to grab your copy of the book today.  Just one warning, pick it up on a night when you don't mind staying awake.  I was so intrigued by the story, it was 4 am before I closed my eyes to sleep.  Even then, I did so, reluctantly.

Behind the Light of Golowduyn Book Reviewed by: