Book Review: A Curve in the Road by Julianne MacLean 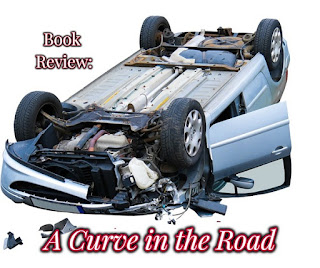 Abbie is a woman with a great life. She has a successful career as a surgeon. She has been married to Alan, a cardiologist, for 27 years. Zach is their son. Zach is a good kid who will soon be on his way to college. Winston is the aging family dog. They have everything a happy family could have. Until it literally comes crashing down. Will Abbie survive? Will she be able to put the pieces back together? This novel written by Julianne MacLean kept me interested and kept me turning the pages well past my bedtime.

Abbie's family lives in a city in Nova Scotia while her mother lives in a small historic town nearby. Abbie and family typically spend Sunday evenings with her mother. However, on this particular evening, Abbie and Winston have gone alone.

While they are headed back to the city, Abbie anxious to catch Zach's hockey game, an oncoming car crosses the center line. A drunk driver nearly kills her and her dog in a horrific wreck. Abbie is trapped and Winston has been thrown from the car and is missing.

With the tragedy of the wreck, devastating family secrets are revealed. Between the discovery that her life was not as she had believed and the resulting physical problems from the wreck, she finds she has to reinvent herself. The decisions she has to make from the crash forward are not easy ones. And many of the dilemmas have no "right" answers. These are not things that anyone can plan for in advance.


There was one point in the story that I thought, "hmm, I'm not a doctor but I really don't think that would have happened that way."  But for me, the rest of the story kept me engaged. There were a couple of times that I thought I could guess what was happening next. Happily, I was wrong. And while this is a love story, about life and adult relationships, there were no sex scenes. I am not against gratuitous sex scenes but I know that some readers prefer not to read them. So I thought I would mention that there are none in this book.

After I read Where the Crawdads Sing by Delia Owens I had a really hard time starting another book. The characters and scenes of Barkley Cove were so vivid in my mind that subsequent
books just didn't seem interesting. I started several books but wasn't able to get past the first chapter or two before laying them down. But A Curve in the Road was easy reading and interesting enough to get me going again. Some reviews refer to A Curve in the Road as "stunningly emotional" and "gripping".  I would not refer to the story as that intense for me. However, I did want to know what would happen next. It says a lot when a book keeps me up long enough to read a few chapters each night before bed.