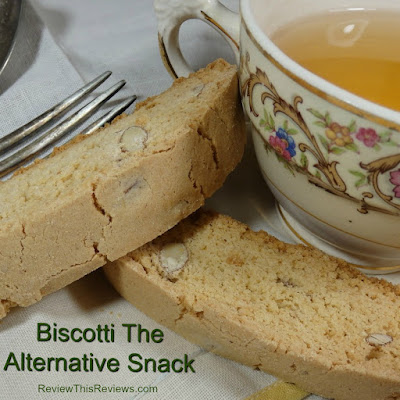 Looking for a light and airy snack? Perfect to accompany a nice cup of tea or coffee? Nonni's biscotti is a yummy alternative to the after meal cookies and sweets or a mid afternoon snack.

The biscotti are made with real butter, eggs and sugar. No preservatives or artificial flavors are used in Nonni's recipe.

Each biscotti is individually wrapped which is very user friendly and keeps the biscotti fresh. The biscotti are light and airy yet crispy. These are perfect for those who like to dunk a crispy treat in their coffee, tea or milk.

These are a very nice alternative to sweets and cookies, but remember that biscotti does translate to a crisp cookie or biscuit. Biscotti is the plural of biscotto and biscotti are traditionally twice baked to obtain the light and dry consistency.


Nonni is the grandmother of the founder of Nonni's Bakery. The lore of the biscotti recipe began with Nonni in Lucca, Italy an area of Tuscan. The family recipe was then brought to America over a century ago.


There are quite a few flavors for the Biscotti!


Where To Buy Nonni's Biscotti


The Biscotti are not inexpensive at our local independent grocer or brand name grocery store. I have found the selection and prices are much better on Amazon. If you'd like to look for Nonni's in your area, check the retail store locator here.

Amazon has a very nice variety pack of Nonni's Biscotti which has four flavors of the Biscotti: Originali, Limone, Turtle Pecan and Cioccolati. The biscotti are much lower priced online than I found locally.

Biscotti are a nice change of pace for those who like sweets and snacks. The flavors are subtle so no need to be worried about being over powered by the flavors.

As they used to say, "Try it - you may like it!" The tagline of Nonni's is Nobody treats you like Nonni's!