Review of Facts and Photos of the Dark Eyed Junco

I think I must have gotten my love of birds from my Mother.  She loved to watch the birds in her yard and one of her favorites was a small grey bird with a white bottom that she called the "Snow Bird".  I have found this bird to be one of my favorites.  They are called Dark Eyed Junco's and it is particularly interesting to watch them hop around on the ground on a snowy day. 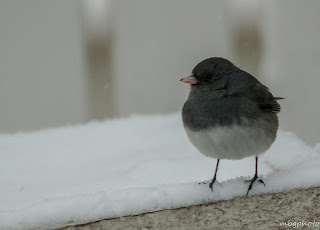 There are other Junco's in North America whose coloring varies across the continent but all are a dark grey or brown and have white outer tail feathers the flash open in flight.  In the western US Junco's have a dark hood and a brown back. These are called the "Oregon Junco"

The Dark Eyed Junco that I show in this article are found throughout Canada and in the eastern US.  I live in eastern Missouri and they are plentiful in my backyard. 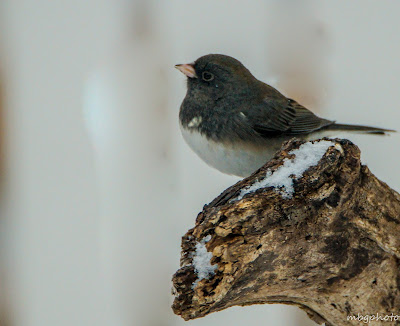 These birds feed primarily by hopping around the base of trees and shrubs looking for fallen seeds.  In the spring and summer they will eat mainly insects.

In my back yard they usually are found beneath the feeders picking up seeds that have fallen when other birds have been at the feeders.  Here is a photo taken on a snowy morning when two Junco's decided to stop at a feeder.  The ground was covered with snow and there weren't any other birds around to knock food off the feeders so they had to go get their own.  Later in the day when more other types of birds were around they were again on the ground pecking away at fallen seeds. 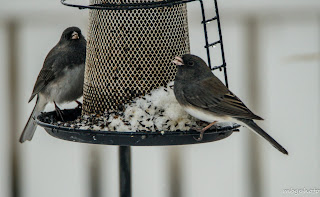 In order to court the females the males will fan and flicker their tail feather and hop up and down.  The males and females will make a nest together and they defend their territory together.  The male however is a bit fickle and is known to mate with several females.

The females usually have between 3-5 eggs at a time and they are incubated by the female for 12-13 days.  The baby birds are ready to leave their nest in 9-13 days.

Junco's are ground nesters and prefer to make their nest on the ground sheltered by either dense shrubs or rocks.  Their nest is an open cup made of fine twigs, rootlets and leaves.