A Review of the AOC Computer Monitor


Well, there I was working on my computer when suddenly, with no warning, my computer monitor dimmed and the picture slowly faded away.  Knowing very little about the inner workings of computers, I had no idea what just happened.

I tried rebooting the computer, but to no avail. I then called my local computer repair shop and described the problem. Their advice was to bring in the tower to my desktop computer for them to run a diagnostics.  Since this service is FREE, I was happy to do so.  Turned out the computer is just fine (thank goodness), so the problem was the monitor.


My old monitor was part of a desktop computer setup I purchased about eight years ago, so it isn't all that surprising that it finally wore out.  The solution ~ buy a new monitor.

Since most computer monitors are interchangeable with any computer setup, it didn't really matter which brand of monitor I bought. Therefore,  I went searching for the best buy.  I didn't need anything really fancy. I'm not a gamer, so didn't need a special gaming monitor.  So it really came down to getting the most for the money.

The monitor I purchased is the AOC 24-inch slim design LED flat screen.  My old monitor was also a flat screen, but was just 19 inches. I'm still getting used to the bigger screen!


On the subject of the 'bigger screen', I noticed quite a difference in the appearance of icons and fonts on this 24-inch monitor. With a larger 'space', everything appeared smaller. After awhile, I discovered there was a way to get back to viewing things on my new monitor the way I was used to. My cousin stopped by for a visit and was telling me a story about how he changed the DISPLAY on his 92-year-old dad's computer monitor to a larger font so he could 'see' the words with his Macular Degeneration limiting his eyesight.   So, following my cousin's instructions, I did a similar change to the size of my fonts.

In case you are wondering, simply go to the Start Menu, click on Control Panel, then Appearance, then Display. 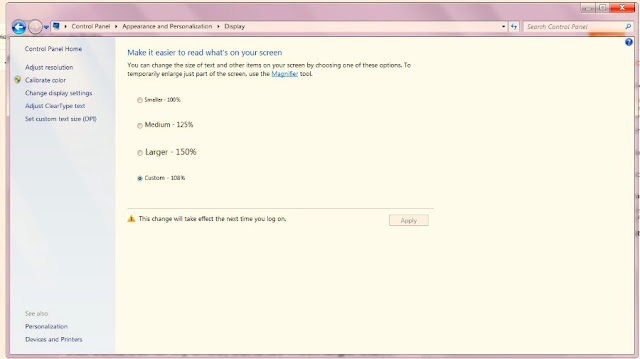 Under the Display tab you will see something that says something similar to "change the size of text and other items on your screen". There are some preset options (small, medium, large) and one option that states 'set custom text'. The 'medium' choice is preset at 125% larger than normal and that works well for my Uncle, but is too much larger than I need.  So I chose my own percentage and found that about 108% larger makes everything on my screen look the way it did when I had just a 19-inch monitor.  Nice to know that you can have something new that is 'bigger and better', and still have it display the way you want.

Key Features of the AOC Monitor


This AOC monitor can be found in a variety of places, including Walmart, but I decided to buy mine at Staples because it was on sale this week.


AOC began as Admiral in Chicago in 1934.  In 1967 the company became the Admiral Overseas Corporation (AOC).  Established in Taiwan, it became the first manufacturer of color televisions for export. Today AOC is known as the Worldwide Leader in Display Manufacturing.


I picked up my computer tower from the repair shop after they checked it out and found it in fine shape.  On the same  trip, I brought home my new monitor.  I unpacked and set up the monitor,  plugged all the cords back into the tower, and turned it on.  My new monitor immediately lit up nice and bright and I was once again 'back in business'. I was without a computer for less than 24 hours, but missed it terribly! It's amazing how dependent we have become on our computers!

Quick Links for a Computer Monitor by AOC: