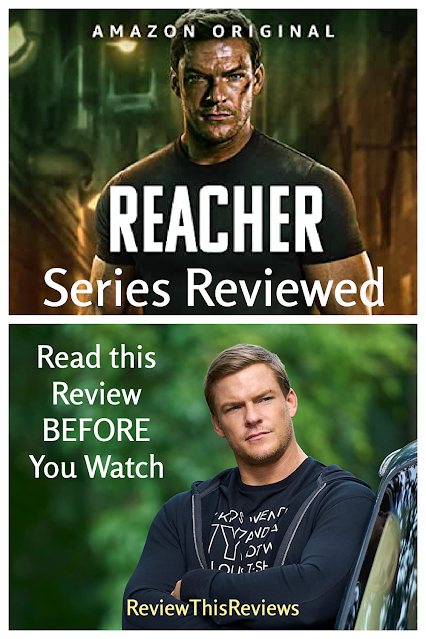 My husband and I spent the last two nights watching the new TV series, "Reacher", based on the character in the books by Lee Child. Obviously, it was a spellbinding series since we watched all 8 episodes in 2 nights. We probably would have watched them all the first night if we had started them earlier in the evening.

I'll start this review by telling you what I liked best about this series, then I will share what I didn't like about the series. Normally, if I am recommending a movie or book, I don't talk about my personal negative opinions. However, in the case of this Amazon Original series, I do think anyone considering watching the shows should be prepared.

What I liked best: the actor that played Jack Reacher. Alan Ritchson is the perfect choice! Totally believable as a former US Army major in the military police with a history of handling difficult cases and standing in harms way.

Something else I liked: the story. It is a captivating suspense. It was not easy to guess who was a good guy and who was a bad guy. That shocking element is always appreciated in a suspense story.

What I don't like: the nudity, the gory images, and one other main character that was not believable as the character she played. I watch a variety of movies with my husband, son, father & brothers. I am hardened to a lot of scenes and images, but this series takes them to an unnecessary extreme level.

I do recommend this series for adults only.  Just be prepared to close your eyes at times.

Reacher – Official TrailerCheck PriceJack Reacher shows up in Margrave, Georgia at the worst possible time for himself, but at the best time for Margrave.  As the new stranger in town, he is immediately suspected as the murderer when 2 bodies are found.

He is arrested for the murders, sent to jail, "accidentally" placed in the "lifers" section of the prison, and forced to defend himself and others. However, as soon as he is released, he starts working with the police to find the real killers because one of the victims is someone very special to him.

Current events, memories, past decisions & actions, lifestyle, friends and family are all recounted and questioned throughout the series. We learn a lot about Jack Reacher, past & present, and find he is someone we would all like to know and have around when needed.

Not only is this a suspenseful series, but it will tug at your heartstrings and perhaps, even pull a tear (or two) from your eyes.