I recently watched The Biggest Little Farm and loved it so much that I am going to order the DVD so that I can watch it repeatedly. The Biggest Little Farm is a film documenting a couple who jump from apartment life to farm life and their progress toward regenerative farming. It is a beautifully filmed story about chasing and obtaining dreams as well as caring deeply for the land. 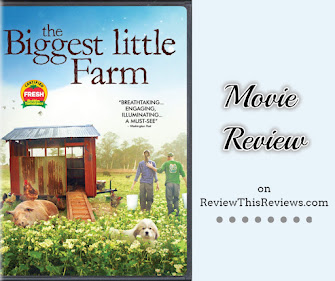 "This all started with a promise we made to a dog"

In 2010, John and Molly were living in an apartment in Santa Monica, California. She is a private chef who specialized in traditional cooking methods. She dreamt of owning a farm and growing everything she could cook. While they lived in this apartment, she grew her own tomatoes on her balcony and shopped at farmer's markets.

John is a filmmaker. While filming an animal hoard situation, with over 200 animals being removed, John met one particular dog and fell in love. They adopted the big black fluffy dog with the just-look-at-those eyes and named him Todd.

"Todd filled us with purpose."

"We made one promise to him... our home would be his last."

Except Todd was not necessarily cooperative. He. Barked. Nonstop. Large fluffy dog in an apartment barking during every moment his family is away is not a good situation. The poor neighbors complained. Molly and John tried many different things to try to solve the problem including dog trainers, calming dog vests, and taking him everywhere they went.

Eventually, the eviction notice arrived. Molly and John had some tough choices to make.

They decided that Molly's dream of living on a farm would be the solution. Farms are perfect for dogs. And for people who eat farm to table. Except there was a problem. Molly and John did not have the funds. So they got investors for this land and this "old way of farming". And they purchased Apricot Lane Farm approximately 1 hour north of Los Angeles.

They wanted to turn this neglected piece of land into a healthy and thriving farm with traditional farming practices and they highlighted how farms have turned into singular-focused businesses. For example, each farm specializes in one item such as avocados. Or chickens. But Molly and John wanted to "emulate how natural ecosystems work. They regulate themselves through diversity".  But how to achieve that?

A man named Alan York mentored them. He had a vision that they couldn't quite see. And he had a plan. This plan included starting the land over and removing what had been planted there. John and Molly didn't quite understand where he was going with his plan. It's hard to understand what you don't know but they followed his advice the best they could.

In order to avoid spoilers, I will stop here.

I highly recommend this film. The cinematography was breath-taking at points. The film was a combination of high quality and beautifully filmed sections that were "National Geographic" in quality mixed with clips from what appeared to be home-videos shot from a handy cell phone.

I did find myself wondering how in the world they just happened to have all of these video clips over the years that were adequate to tell the story. And the cynical side of me thought it had to be set up or staged in some way. But during an interview I have since watched, John answers that concern. Being a filmmaker, documenting their journey was a part of his everyday life (I imagine much like I find myself filming my chickens, deer, and the sunsets on my ridge each day). In addition, some of their interns had a similar interest in journalism. So they decided to video and to save those videos; the good, bad, and in between. This is how they had so many pieces of the journey on video.

At points, I also thought that they were going to go down the path of farmer-bashing which would have irritated me. But they didn't. They pointed out that farming has been moving away from farms with a variety of crops/livestock to businesses with a single crop/focus.

Is their natural, regenerative ecosystem something I could replicate? Well. No. I am not up to the challenge of finding investors to buy 200 acres of land. Nor am I organized enough to bring in interns to help. I can barely manage myself most days. However, I would LOVE to have this sort of ecosystem, in miniature, on my land in some way. Much like when John and Molly listened to Alan York's directions in the beginning, I just don't quite get it. But I am trying to learn.

This is not a how-to movie. There are no step-by-step directions and I will have to do much research on my own. However, this movie does give a visual overview of how a very damaged ecosystem begins to find it's balance with some help. This movie inspires. This also is a movie about humans who loved a dog enough to give him his forever home.

You can do as I did and rent this movie on Amazon Prime for just a few dollars. I realized that with Amazon Prime, I could rent movies and avoid buying the DVDs and Blu-Rays that stack up and collect dust when I don't care to view them again. When I rent a movie that I know I'll want to re-watch many times, I do end up buying the copy. This is one of those movies that I will order so that it is on my bookcase and I can watch it again and again.