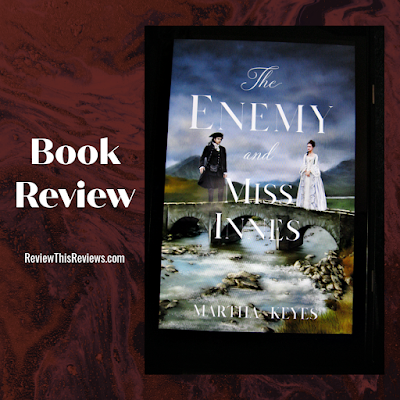 Almost a year ago, I reviewed the first book in the Tales from the Highlands series by Martha Keyes.  I truly loved The Widow and the Highlander book and I hated it when it ended.  I was saddened even more when I realized that the second book in the series had yet to be released.  Even though I did not want to, I was forced to move on, at least for a little while.

As soon as The Enemy and Miss Innes, the second book in the Tales from the Highlands series, was released, I added it to my Kindle Paperwhite.  Unfortunately, the release wasn't the best timing for me, but the book waited there patiently.  I started reading it a week ago and was, once again, pulled back into the drama of the Highlands of Scotland in the 1700's.  Back to the days of kingdoms, lairds (lords), and a ruling hierarchy with limitless power.

I was not disappointed!  This was a book well worth the wait.  The Enemy and Miss Innes is another fabulous book by Martha Keyes.  While it continues the series started with The Widow and the Highlander, it could be an easy stand alone book for historical fiction fans. Just because I have enjoyed this series so much, I would recommend starting with the first book in the series.

The Enemy and Miss Innes
(Tales from the Highlands Book 2)Check PriceMalcolm MacKinnon is once again ordered to do something he does not want to do by Angus MacKinnon, the laird of Benleith. Since his mother and younger siblings are also dependent on Angus, he has no choice.  It is a well known fact that Angus is ruthless, even murderous, when he wants something. He does not hesitate to threaten Malcolms' family when faced with the least resistance. Now, Angus seeks revenge on the Innes sisters.  Since the eldest has a protector in her husband, he sets his sights on the younger sister, Elizabeth.  Her willingness to speak her mind and publicly degrade Angus has made her his latest target.

Angus wants Malcolm to get Elizabeth to fall in love with him (Malcolm) so he has a way to get at her to exact his revenge. This "idea" doesn't appeal to Malcolm but he knows he has to at least give the appearance of trying to carry out Angus's plan.

Elizabeth Innes has been by her sister's side throughout her recent widowhood and subsequent difficulties. She is her outspoken defender and doesn't hesitant to take on anyone face to face, including Angus MacKinnon and his "second in command", Malcolm MacKinnon.

In an effort to keep Elizabeth focused on work and out of trouble, her sister, Christina, asks her to remodel Glengour Inn, which was recently damaged by fire.  This is a task Christina readily accepts.  When she arrives at the inn to discover the innkeeper has hired Malcolm MacKinnon, she is determined to keep an eye on him. She believes he has a different agenda separate from working on repairs to the inn.

Neither Christina nor Malcolm are happy with the current situation, but they are both determined to carry out their projects at the inn and tolerate each other.  They do not expect to end up on the same side and caring for what happens to one another.

I am thrilled to see more books have been added to this series and I am so excited to read the remaining books!

You may also be interested in reading my previous review of The Widow and the Highlander.


The Enemy and Miss Innes (Tales from the Highlands Book 2) Book Review by: