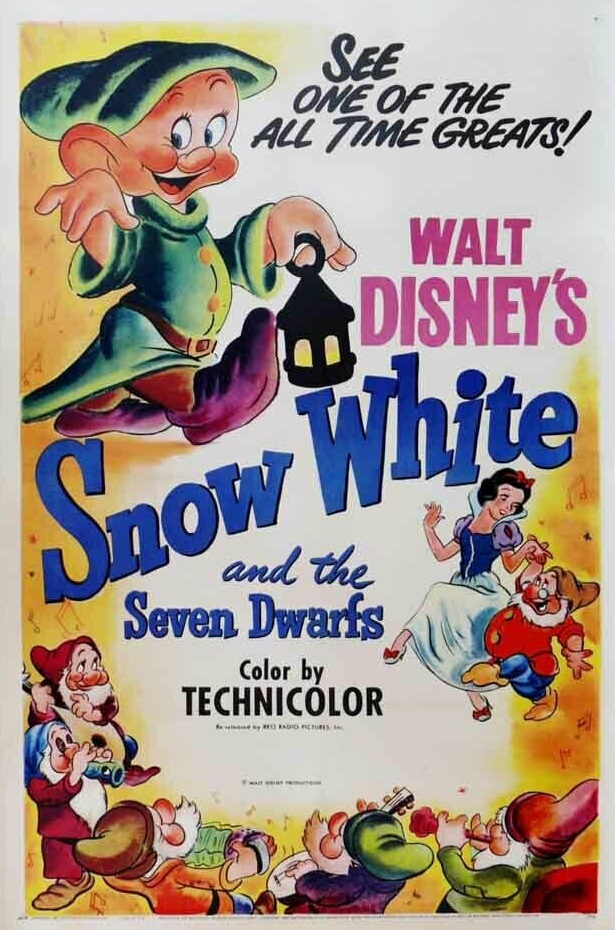 
Disney's Snow White and the Seven Dwarfs is a movie that never gets old. It was Walt Disney's first full length animated feature film. It was released in 1937 and featured the voices of Roy Atwell, Adriana Caselotti, Lucille Laverne and Pinto Colvig. It was one of the first Disney movies that I remember seeing as a little girl though I did not see it when it was new. If I had to guess, I would guess that I saw it a number of decades later at the movie theater when I was just old enough to go to a movie, perhaps in the late 1960s.

Most of us know the story line of this now classic movie that was based on a tale by the Brothers Grimm. It follows the adventures and misadventures of young woman named Snow White who is mistreated by her stepmother. She escapes and winds up living with the seven wonderful dwarfs that we know and love, namely Sleepy, Dopey, Sneezy, Happy, Bashful, Grumpy and Doc. Of course, in true Disney form, we all know that Snow White is eventually rescued by a handsome prince.


Even initially, Snow White and the Seven Dwarfs was considered a critical and a commercial success for Walt Disney Productions and the movie at one point held the record for highest grossing movie with sound when it earned eight million dollars at the box office. Quite fittingly, I think, child actor Shirley Temple presented Walt Disney with an honorary Oscar for the movie in 1938. I should perhaps say with a series of Oscars since the design of this particular Oscar was truly unique consisting of one normal-sized Oscar and seven smaller ones mounted on an attractive platform.


If you simply want a representation of the movie, I do like the idea of a reproduction movie poster. The poster shown on this page is a reproduction available on Amazon and measures approximately 11 inches by 17 inches or 28 cms by 44 cms. Because it is new, it has naturally never been hung so it has no tape marks and no pin marks. You can find it affordably prized on Amazon by following this link.


You can occasionally find an interesting vintage Snow White and the Seven Dwarfs movie poster on eBay by following this link. If it is a true vintage poster you are after, you will have to shop carefully to avoid reproductions. However, the hunt might well be worth it. I think that some of those old pieces are very attractive.

I believe that a Snow White poster would be a great addition to any movie- or Disney-themed room and, of course, it would really suit any little girl’s bedroom or even a baby girl’s nursery.

Would it be a new or vintage movie poster for you and where would you display it?

See you
at the movies!
Brenda
Movie Treasures By Brenda