A Look at Lighthouses in Celebration of National Lighthouse Day


On August 7, 1789, Congress approved an Act to establish and support lighthouses, beacons, buoys and public piers.

On the 200th Anniversary of this Act, August 7, 1989,  Congress passed a resolution to designate August 7th as National Lighthouse Day.  To honor this day, let's review a few lighthouses through stories, photos, and a handmade lighthouse picture afghan.


The lighthouse expert on Review This! is Mary Beth (mbgphoto), who has captured the images of over 100 lighthouses around the United States through her very fine photographs.  Check out a few of her outstanding images on her blog, (Lighthouse Musings) as she tells the story behind each one.

Then visit Mary Beth's charming Zazzle Store called “Lighthouse Enthusiast” for a wide variety of products decorated with her beautiful lighthouse photographs, such as the lovely photo of the Cape Florida Lighthouse shown above on a greeting card.

Mary Beth has also shared several of her fabulous lighthouse photographs from her various visits to lighthouses around the country in her salute for Review This of National Lighthouse Day.

Of course, Michigan is known as the Land of the Inland Seas and has connections to 4 of the 5 Great Lakes with 3,200 miles of coastline, so sailors on these often temperamental inland seas certainly need the help of the lighthouses as much as ocean-going vessels. 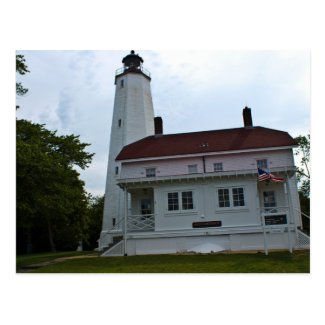 I've visited a number of lighthouses over the years, but the lighthouse that has become most dear to me is the Tybee Island Light Station at Tybee Island, Georgia.  It's one of seven Colonial lighthouses; this one originally built in 1732 at the entrance of the Savannah River, which separates Georgia from South Carolina.

The Tybee Lighthouse has been a navigational aid for 270 years.  For 13 of those years, I lived on Tybee Island where I could see the lighthouse every day! And, our daughter was married there in the Lightkeepers Cottage!

Celebrate National Lighthouse Day each Year on August 7th or Enjoy a Lighthouse Anytime Throughout the Year!

National Lighthouse Day commemorates a beacon of light that symbolizes safety and security for boats at sea.

Celebrate anytime by visiting a lighthouse, or learning more about a local lighthouse.  This Lighthouse Journal will help you keep track of your lighthouse visits.

Wednesday Elf can also be found at:Crochet Crafts Critters Blog
and many other places listed below.