As a huge fan of historical fiction, I want to share a series of books that I recently discovered. The Anasazi Mystery Series consists of three very well written books that I highly recommend to anyone who loves this genre of literature.

The series was written by Kathleen O'Neal Gear and her husband W. Michael Gear who are not only gifted with telling a great story but are also both archaeologists. Their knowledge of the science involved in  a "dig" adds remarkable depth to the story they unfold in each of the three books.

In each of the three books, we go back and forth between a modern day team of archaeologists who have uncovered bodies of women that have been buried in a most nontraditional manner and the story of the Anasazi peoples who inhabited the area where the bodies were found. The "dig" is taking place in the late 1990's and early 2000's. When we are learning the events that led up to these women being buried we are in the time frame of around 1150 to 1200 AD. The time frame from the past is significant because it is the era that most historians and scientist place the sudden disappearance of the Anasazi peoples.

You will want to start with the first book because the story builds and continues with books two and three. 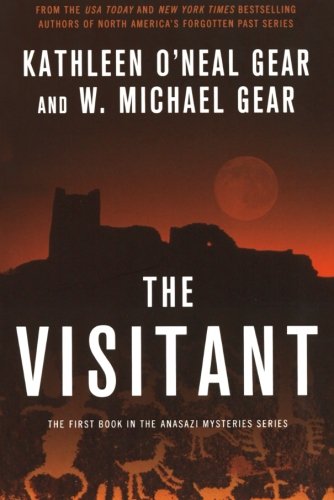 The Visitant: Book I of the Anasazi Mysteries

Who Were The Anasazi?

They are often referred to by many names. The word Anasazi is loosely based on a Navajo word which means ancient ones or ancient enemies. You might also know them as the cliff dwellers or the peoples who created the cliff dwellings found in the Four Corners area of the US. Modern historians refer to this group of peoples as the Ancestral Puebloans.

There is much debate among the scholars as to when the culture first emerged but the general consensus is that it was around 1200 BC and they seem to have ceased to exist around 1200 AD. That is 2400 years, folks! What happened to them? Where did they go?

I have been fascinated with this ancient group of American Indians for as long as I can remember so when I saw the series, I knew I just had to read it.

The Series Is A Mixture of A Mystery, history and so much more!

What I love about this short series of books that could almost be called a trilogy is that there is a great mystery to solve. Why were these women buried in such a nontraditional manner? Were they tortured and if so; why? Who did this?

The series goes beyond the mystery, though. The authors give us a background in how this culture lived and what the climate was like at the time. We learn about their religious beliefs, the warfare among the peoples in the area at the time and of a sickness that could be a huge part of their demise as a culture. It is a story about good versus evil, about love and loss and how people have not changed a whole lot over the centuries.

There are questions raised in my own mind as I have read through these three books. As the story unfolds we see that there is often a struggle with the scientists. There are the scientific facts that come to light during any excavation of artifacts and skeletal remains but there is also the beliefs of the people involved from an emotional and spiritual level. How does one separate the two or better yet should they even try to keep them separate? Is it possible for the spirits of the past to reach out to us and help us understand what happened? A discussion for another day, but interesting in and of itself.

I highly recommend this set of books: The Anasazi Mystery Series to the fan of historical fiction and those who love a great mystery. The books include: