Review of The Color of Law by Mark Gimenez


Why Do Corporate Lawyers Have Such a Bad Reputation?


The Color of Law gives readers a fictional peek inside the world of large law corporations and will show you why corporate lawyers have such a bad reputation. 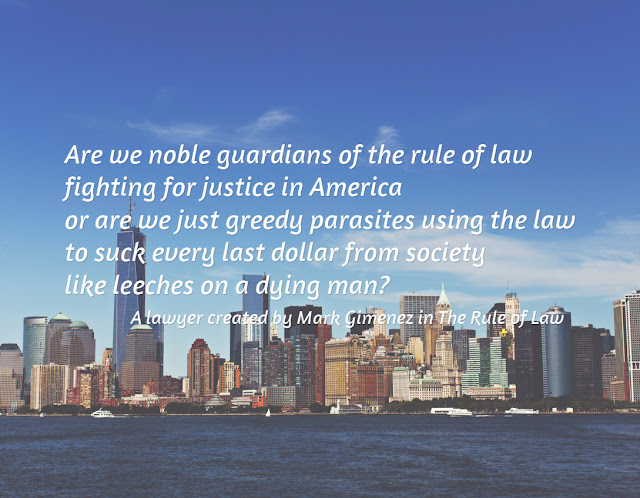 We meet protagonist Scott Feeney as he speaks to a group of lawyers he hopes will elect him President of the State Bar in Texas. He asks his fellow lawyers: 'Are we really doing good, or are we just doing really well? Are we noble guardians of the rule of law fighting for justice in America or are we just greedy parasites using the law to suck every last dollar from society like leeches on a dying man? Are we making the world a better place or are we just making ourselves filthy rich?' These words and the ones that followed in the same tone, declaring that yes, they were fighting for justice and that he was proud to be a lawyer, got him a standing ovation. He said he wanted to make his mother, who had told him to become another Atticus Finch, proud.

When the lawyer Feeney wants to replace as president of the bar calls his bluff with a whisper in his ear about his impressive line of BS, Scott replies, 'Henry, you don't get laid or elected by telling the truth.' Unbeknownst to Scott, there was one lawyer, sitting in the back of the dining room by himself, who was not applauding, United States District Court Judge Samuel Buford. He was, however, smiling to himself.

Scott Feeny has it all. He had been a partner at the prominent Ford Stevens law firm in Dallas for four years and was making $750,000 a year. He has a beautiful wife, a nine-year-old daughter, “Boo,” whom he dearly loves, and a mini-mansion in a very exclusive community known as Highland Park. He belongs to an exclusive country club. He has everything money can buy, and he really doesn't want to let his family know what he has to do to earn it. The reader, however, sees it all, and recognizes that what Scott does may be “legal,” but definitely not moral.


Why Scott's World Is Turned Upside Down

Two things happen to change Scott's world. A black prostitute is accused of murdering a Texas senator's playboy son, Clark McCall. Senator Mack McCall is planning to run for President. After throwing the words of Scott's speech back at him, Judge Buford calls on Scott to defend the prostitute, Shawanda Jones, for free, as a court-appointed lawyer. The judge says Scott would make his mother proud by taking the case. Scott cannot find a way to wiggle out of it. The judge rubs it in that it was Scott's speech that makes him decide to appoint Scott instead of a regular criminal defense attorney.

Defending Shawanda, however, threatens everything Scott has worked for in life. At first, he plans to have Shawanda plea bargain, as his boss wants him to, to keep the case from going to trial. Shawanda, however, insists she is innocent, and Scott begins to believe her. As he attempts to put all he has into Shawanda's defense, the other partners at Ford Stevens fire him because they don't want their firm's name dragged through the mud. Scott's best clients drop him due to pressure from McCall. In fact, it seems McCall indirectly controls almost all Scott has and is taking it from him.

In contrast to the dirty politics and social pressure in what had been Scott's corporate law career, we see Scott's healthy relationship with his daughter, “Boo.” He reads the Constitution to her at night like a bedtime story, and they discuss it and how it applies to life and law. She not only supports her dad's decision to defend Shawanda but also encourages her dad to let Shawanda's daughter live with them to keep her safe while her mother is in jail. Shawanda lives in the projects that Scott is scared to even drive to. Meanwhile, Scott's wife, Rebecca, finally leaves him to run off with the assistant golf pro at the country club where Scott (and she as his wife) have had their membership taken away due to McCall pulling some strings. Her relationship with Scott was not strong enough to survive losing their wealth and social status.

Meanwhile, an old friend of Scott's from his youth, Bobby Herrin, reenters his life. Scott has always been Bobby's hero, but Bobby wasn't good enough at football to get a scholarship at SMU as Scott did. He had to get a student loan. Although he followed Scott to law school, his grades weren't as good as Scott's. Scott and Bobby had once planned to practice law together, but Scott could not resist the call of the opportunity Ford Stevens offered him. The large law firms didn't want someone like Bobby, so he became a street lawyer. As Scott starts losing everything, Bobby begins to play an important part in Scott's life again. Now it is Bobby who can teach Scott a few things.

When I began to read this book, I almost stopped because it mostly focused on Scott's perfect life and dirty corporate law. I always, however, give a book at least fifty pages, and by the time I had read those fifty pages I was hooked. The book has a lot to say about power versus justice. Scott finally learns for himself what it means to do good, as opposed to just really well. I was very satisfied with the ending of the book, but I won't spoil it for you. Once past those first few pages, there is plenty of suspense and human interest to keep you reading until the end.  I'm  looking forward to the next novel in this series, Accused, where Scott will have to defend the wife who left him. She is accused of killing the golf pro she ran off with.

Gimenez writes on some of the same themes as John Grisham and handles them with the same skill. Some critics believe he is overtaking Grisham. Whether that is true is something you will need to decide for yourself. I will have to read a few more by Gimenez to decide, but I'd say he is definitely giving Grisham some competition.