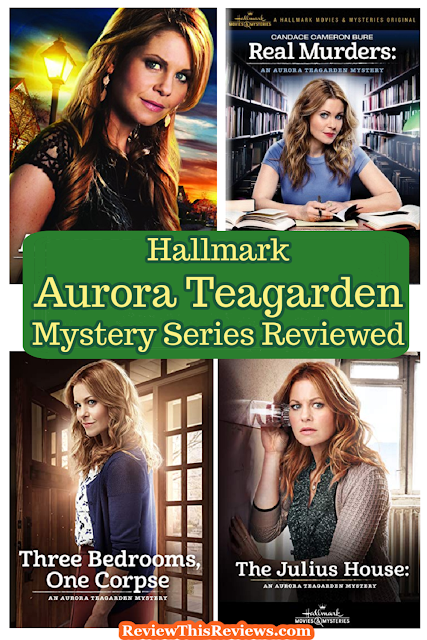 Several years ago, our contributor, Bev Owens, reviewed the Aurora Teagarden book series by Charlaine Harris. I was immediately interested in the great cozy mystery books. I love a series that allows us to follow the main character through multiple intriguing mysteries.  Since this series has 11 books, and because Bev highly recommended them, I knew I was in for a real treat that would last for perhaps a few weeks of great reading.


I recently discovered the Hallmark Aurora Teagarden mystery movie series based on the books and immediately started watching them.  I enjoyed the first movie so much, that I watched the second movie as soon as the first one ended.  By the time I turned off the videos, I had watched the first 4 movies back to back.  I only stopped there because I had to get some sleep!  Honestly, I can hardly wait to have another evening to dedicate to more of the movie series.

I decided it would be more economical for me to buy the complete series instead of paying for each movie individually.  I want to see all 15 of them that are currently available on dvd!  I expect to watch them more than once, plus I plan to share them with my mother, who also loves Hallmark movies.  Therefore, the seasonal box sets were my best option.  You can see the box sets I selected at the bottom of this article.  I tried to get the most movies for the least investment, but I did have to purchase 2 sets to get all 15 movies.

While the books do give a lot more background and details, I found the movies felt "complete" and I love the actors!

In many mystery movies, we follow detectives as they investigate murders, but Aurora is not a police officer or detective.  She is simply a librarian with an penchant for solving murder mysteries.  She is a member of the local Real Murders club that consists of armchair sleuths who enjoy studying real murder cases and known murderers. Give them a real murder mystery to solve, and they are all in!

In each of the episodes, Aurora discovers evidence of a murder, or finds the actual victim. She calls on her amateur detective fellow club members to help her solve the case, much to the distress and disapproval of the local police.  But, the detectives tolerate her because she does seem to have a natural aptitude for ferreting out information from people and evidence that the police would never be allowed to find.

Aurora Teagarden: 6-Movie CollectionCheck PriceIn the first movie episode, A Bone to Pick, Aurora finds a hidden skull in the window seat of a home she inherits. Instead of contacting the police, she starts her own investigation based on what else she can find around the house and on her knowledge of the deceased homeowner.  It is interesting, and sometimes comical to watch Aurora "work".  If she were my neighbor, I would consider her way too nosy, but that is how she solves cases.  She asks a lot of questions and does a lot of snooping.

The second movie, Real Murders, focuses on her Real Murder club when one of their own members is murdered and the club members are the main suspects. Aurora is joined by one of her favorite fictional crime book authors in this investigation, but there are times when it is hard to know if he is an ally, a romantic interest, a suspect or all of the above.

In Three Bedrooms, One Corpse, which is the third movie, Aurora is helping her mother by showing one of her real estate properties to a new client.  Sadly, they discover the body of one of the real estate agents working for her mother's agency.  While in the home, Aurora notices that something doesn't look right.  She can't quite figure out what detail is off until she compares current pictures to old pictures. Her keen observation and attention to detail points the detectives in the right direction, but also puts her in great danger.

The Julius House is the fourth movie in the series and happened to be my favorite thus far.  In addition to being an excellent cozy mystery with a surprising end, there is a touch of romance developing between Aurora and Martin, her mother's client from the previous episode.  The mystery revolves around the disappearance of the entire Julius family.  It was believed that the family was probably victims of a car accident that simply hasn't been discovered. Or, perhaps, they decided to leave for unknown reasons. Aurora's "detective" sense is aroused when she buys the family home and meets the heir, Melba Totino (the wife's mother), who sold her the home.  Conversations with Mrs. Totino, coupled with Aurora's natural inquisitive mind, set off a chain of events that finally lead to discovering what really happened to the Julius family.

Each of these movies would be enjoyable alone, but as a series, the characters become more developed as they move along, and as I said in the introduction, I really like the actors who were selected to play the parts.  Candace Cameron Bure is a very believable Aurora Teagarden.

These are the two box sets that I purchased!