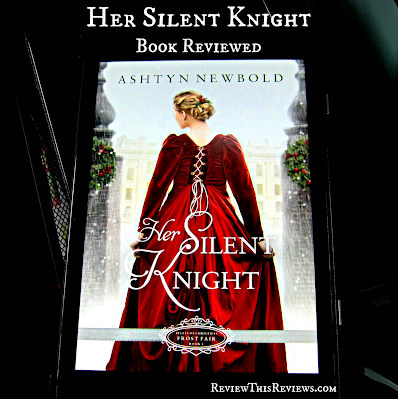 Did you know that it is recorded that the Thames River has frozen over 24 times?  Seven of those times, the ice was solid enough that they held a Frost Fair in London.

The celebrated Frost Fair of 1683-84 featured multiple activities including horse races, football, bowling, ice skating, sledding and more. Vendor booths were set up to sell souvenirs, food and refreshments. Londoner's clearly knew how to quickly make a rare occurrence into a fun festival for all.

In 1814 (the last Frost Fair), an elephant was led across the ice. Reminiscent of previous frost fairs, there was dancing, ice skating and of course, vendors.  It lasted only 4 days before the ice broke up and several people drowned.

The very real historical Frost Fair of 1814 is the setting of the entire "Belles of Christmas: Frost Fair" series.  This series provides a wonderful look back into history, as well as some really awesome romantic stories.

First in the series is "Her Silent Knight". It was such a captivating book, that I read it in one night.  Yes, it was nearly 4 am before I went to sleep, but it was worth it!  I thoroughly enjoyed the sweet story.

Her Silent Knight: A Christmas Regency Romance (Belles of Christmas: Frost Fair Book 1)Check PriceSelina Ellis becomes secretly engaged to Noah Skinner, a solicitor who is below her social status. Mr. Skinner would never be considered an acceptable suitor for Selina, especially by her own mother.  But, Selina doesn't care!  She believes she is in love with Mr. Skinner and when he proposes marriage at the Frost Fair, Selina agrees to marry him, even if it means they would be required to elope.

The couples embrace is witnessed by a childhood friend that Selina hasn't seen in years. When Sir Edmund Sharp recognizes the two people hugging each other, he knows he must find a way to save Selina from the man with a scandalous reputation.  She is young, naive, and clearly unaware of Mr. Skinner's "manipulations". What Sir Edmund cannot immediately figure out is why Mr. Skinner would pursue a lady with no inheritance. Upon her father's death, their home and money was entailed to a distant relative since Mr. Ellis has no sons.  That left Selina and her mother living on a meager stipend.

Sir Edmund agrees to keep Selina's secret if she will make sure he is invited to spend the Christmastide (the 12 days of Christmas) in her home. The request makes sense because his grandmother recently died and he has no other family in London. Selina's mother had always adored Edmund, plus she saw him as the perfect suitor for Selina. Therefore, securing an invitation for Christmastide was not difficult at all.

Now, Sir Edmund only has to figure out how to separate Selina from Mr. Skinner.  That won't be as easy as Sir Edmund had originally thought since Mr. Skinner has possession of Edmund's grandmothers will. Skinner is willing to do whatever is necessary to keep Sir Edmund from interfering in his relationship with Selina.


"Her Silent Knight" is a sweet story of love, chivalry, and childhood loyalties embedded in an enchanting historical fiction, set in the fantastic short-lived Frost Fair on the Thames River in London.  It is the first book in the Belles of Christmas: Frost Fair series shown below.

All but one of these authors are new to me.  I love that when it happens in a co-op series!