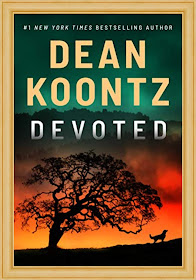 Long-time fans of Dean Koontz know he is a dog-lover and, in particular, of Golden Retrievers. He has written 3 books from the point of view of Trixie, the first Golden that he and wife, Gerda, owned, plus a memoir about Trixie after her death.  Today they live with their Golden Retriever Elsa and the enduring spirits of Goldens Anna and Trixie.

All of us Koontz fans have read Watchers, which featured a very smart Golden Retriever. All together, Dean Koontz has written four novels where one of the main characters is a dog.  Now, with Devoted, he again features a very special Golden Retriever around whom the story revolves.

Woody Bookman – an 11-year-old boy who has never spoken a word. Woody has been diagnosed with a rare form of autism, although he is also a high-functioning autodidact with a high IQ. He taught himself to read at age 4 and was reading at the college level by age 7. He is also an accomplished computer hacker.

Megan Bookman – Woody's mother, who loves him with all her heart.  Widowed at age 30, she is an artist whose paintings are quickly gaining a following. She doesn't really care whether critical acclaim waxes or wans; she's just grateful to have discovered that there was life after life after her first life ended with the death of her husband, Jason. Now her art and her child are enough for her. Keeping her boy safe and happy is what matters.

Kipp – a uniquely gifted dog with a heart as golden as his breed. Kipp is devoted beyond reason to people. When he hears the boy who communicates like he does, without speaking, Kipp knows he needs to find him before it's too late.

A Mother, A Boy, and a Dog Against the Night

Woody believes his father's death was not an accident. He believes a tremendous evil was behind it and now threatens him and his mother.  As Woody gathers information through his computer skills and his suspicions take shape, an evil man sets a depraved plan into motion. And he's coming after Woody and his mother. Only a force greater than evil can stop what is coming next.

One boy with the power to save the world. One man with the will to destroy it.  ~Google Books

Watchers, Fear Nothing, and its sequel Seize the Night, and The Darkest Evening of the Year.

Devoted was published in March, 2020. If you love mysteries or thrillers with dogs and children and great writing, you will love this book. I  found it fascinating and impossible to put down.

Dean Koontz writing has the ability to show the extremes of good and evil, and the overwhelming power of love.

*Available in hardcover, paperback, audio book and on Kindle Unlimited on Amazon.