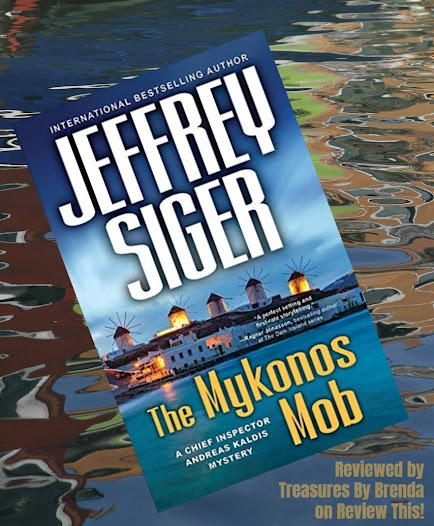 My accidental introduction to Chief Inspector Andreas Kaldis via Jeffrey Siger’s tenth book, The Mykonos Mob, came about because of the pandemic. Limiting trips to public places means that my husband has become the designated library picker upper. Most of our library books are requested in advance online and then picked up when they are available but on this particular day I felt like reading something different and my husband left home with instructions to find me something different to read. Maybe something that was recent. Maybe a mystery or a thriller.

He came home with a number of options including this one, The Mykonos Mob, which follows Chief Inspector Andreas Kaldis who leaves Athens for the Greek island of Mykonos. To those not very familiar with Greece, like myself, Mykonos is a Greek island with a thriving tourist industry and a reputation. That is, a reputation for a busy beach scene and lots of nightlife. It is considered an international playground and may not necessarily be the kind of vacation I would be looking for but is interesting as a destination nevertheless.

In this book, Kaldis works to solve the murder of a corrupt former police officer who now runs a protection racket on Mykonos. We meet the main players who include Kaldis, his Special Crimes unit, his wife and an interesting American woman who has transplanted herself to Mykonos and who plays piano in a bar at night and solves local crimes during the day.

As an armchair traveler, I don’t think any of my ‘trips’ have included Greece. This book offered a look at the seedy underbelly of the island but also at some Greek culture. It is not a travel guide nor a travel book per se and some parts of the life reflected in this book might have you thinking you do not want to visit Mykonos but it was interesting to learn about some of the issues of life in Greece and in particular on Mykonos. The author, Jeffrey Siger, left a career as a Wall Street lawyer in New York to live on the Aegean Greek island that is Mykonos and to write books like this one. It is intentional that they share a fast moving story and some real life Greece.

I enjoyed The Mykonos Mob and yes, I do recommend it. I enjoyed the look into life in Greece, a place that I would like to visit one day, and I liked the main characters. I will be reading the rest of this series. I think this book would suit any man or woman who enjoys a good murder mystery as well as someone with an interest in life in modern-day Greece. 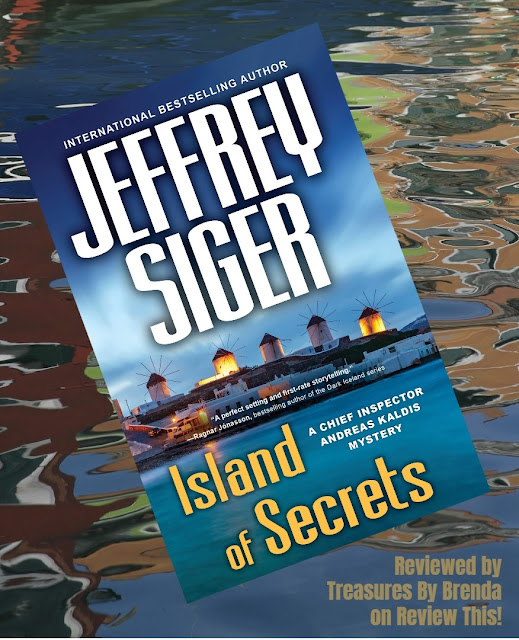 Here’s the order you should read the books. Note that this book, The Mykonos Mob, is number ten in the series. Starting with number ten is not my usual style and I doubt it is yours. Another important note is that the book name was changed to Island of Secrets when it was released in paperback.

Murder in Mykonos
Assassins of Athens
Prey on Patmos
Target
Mykonos After Midnight
Sons of Sparta
Devil of Delphi
Santorini Caesars
An Aegean April
The Mykonos Mob (Island of Secrets in paperback)
A Deadly Twist
Find your Jeffrey Siger book on Amazon in hardcover, paperback or Kindle by clicking right here.

Do you like a good murder mystery?  Have you read any good fiction books set Greece that you would recommend, mystery or otherwise?

See you
at the book store!
Brenda
Treasures By Brenda