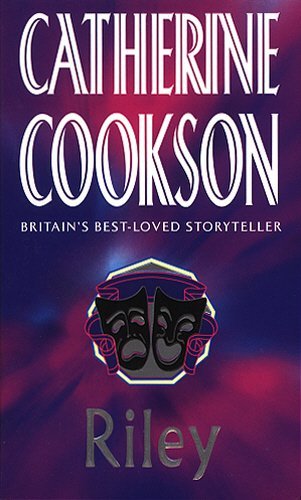 Many years ago, I parted with most of my Catherine Cookson books, retaining only the few that I had not read, like the one shown here called Riley. It had been decades since I had picked up any of Cookson's books but I remember fondly having loved the stories, which are set in the 19th century in and around what was then at least a heavily industrialized area of northeast England called Tyneside.

With the arrival in 2020 of the virus that would lock down most of the world, I set to reading through some of my old piles of books and hence returned to the works of Catherine Cookson via this novel, Riley.

Riley was indeed very good and it did not in any way fail my memories of Cookson’s books. It is the story of a young lad with no direction who was surely bound for trouble but was indirectly 'rescued’ by a few heated comments from a caring teacher. The result of those comments was a tumultuous but successful life on the stage and marriage to a woman 20 years his elder.
Riley is Highly Recommended by me for anyone who loves historical fiction.

Author Catherine Cookson, despite being from an extremely poor, working class home in Tyneside, England, went on to become one of the richest women in Britain. More importantly in my mind at least, she also went on to become Britain’s most read author in the mid-1990s and remains on the list of the twenty most read British novelists. She wrote a remarkable two books a year in many years and, when she died in 1998, she left behind 103 novels and a fortune for charity.

Catherine Cookson's novels were often categorized as romance despite the fact that, as Cookson said herself, there was nothing romantic about the times or the situations in her books. Her stories offered up more than historical romance and are extremely well done in terms of depicting a time period in history, which would surely make them qualify as historical fiction today.

I do not want to stop with recommending Riley, however. I want to make my post a call for people to pick up Catherine Cookson’s books whether they knew her before they arrived here on this page or not. It doesn’t matter which book you start with whether it be Riley or another, they are all sure to please. Just be careful if you start with a series like Mary Ann Shaughnessy, Tilly Trotter or the Bailey Chronicles that you pick the first one.  You will find Riley on Amazon by clicking right here.
See you
At the bookstore!
Brenda

Quick Links:
Buy Riley on Amazon.
Catherine Cookson’s Life
Discover the new, used and vintage books in my eBay store by clicking here but be warned that unfortunately there are no Catherine Cookson novels!
The Alice Network by Kate Quinn reviewed.
Fast Girls by Elise Hooper reviewed.