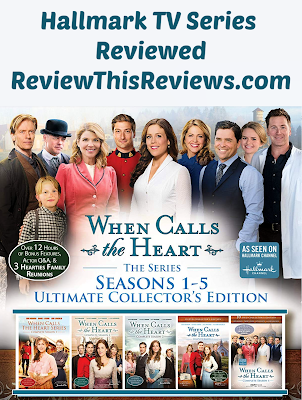 Many years ago, I read the "Canadian West" book series by Janette Oke.  A few years ago, I started watching the Hallmark channel series "When Calls the Heart" which is based on that book series and is titled after the first book in the series.

A few weeks ago, I decided to start watching the TV series again from the beginning.  I do love the show!  With the promised release of season eight in 2021, I wanted to go back to the beginning before the new series actually airs.  Yes, I realize I have plenty of time before 2021, but I rarely spend a lot of time watching TV during the holidays and I expect it to take me a few months to watch all of the episodes again.

I would also like to read the book series again.  Janette Oke is one of my favorite authors.  Decades ago, her books were responsible for my discovery of romantic books with a religious theme, which is my preferred book genre.  Any time I see her name on a book, I know I am safe to read that book.  That is extremely important to me.  I don't like grotesque or explicit content in a book or in movies.  Having authors I know will protect my eyes and mind from uncomfortable subject matter makes my book and movie selections a whole lot easier.

This sweet series, that deals with real life issues, is an inspiration.  I really like all of the characters and actors past and present.

There are extremely sad times in the show, but overall I am left with a feeling of happiness after watching an episode.  And, I am always eager to watch the next one. It is so nice to be able to watch them back to back, without delays or months between the seasons. I have been surprised to realize there were a few things I had forgotten and have enjoyed rediscovering them.


The Synopsis of the Hallmark Series, When Calls the Heart


When Calls the Heart - Seasons 1-5
Ultimate Collector's EditionCheck PriceIn search of a purposeful life, Elizabeth Thatcher (Erin Krakow) accepts a teaching position in Coal Valley in western Canada.  She immediately discovers that her wealthy family background has not prepared her for the frontier.  That is pretty obvious to everyone, but she is determined to survive, thrive, and succeed.  Fortunately for Elizabeth, she is befriended by a very respected and loved resident, Abigail Stanton (Lori Loughlin) who supports and encourages her in her new life.

Coal Valley has recently endured a horrific coal mine explosion that has made dozens of the women in town (including Abigail Stanton), widows and many of the school children fatherless.  Their church, which housed their school, was burned down.  The classroom has been moved into the saloon, the only local business with a large enough room.  The saloon also doubles as a hotel, which means the students are occasionally interrupted by guests coming in or out, even though the bar is closed during school hours.

Shortly after Elizabeth arrives in Coal Valley, a newly assigned Mountie arrives.  Constable Jack Thornton is not happy with his new assignment.  He was headed to the desired and prestigious assignment of Cape Fullerton when he was redirected and sent to Coal Valley instead.  As soon as Jack hears Elizabeth's last name, he realizes she is the reason he was reassigned and is immediately resentful.  She is clueless about why the new Mountie seems to be mad at her until he explains that clearly her father had him reassigned so he could watch over his "princess" daughter.  Elizabeth isn't happy about it either.  She wants to prove herself capable and independent. She doesn't want or need a Mountie "taking care" of her and she is quick to point that out to Constable Jack.  This is just the first of many conflicts and misunderstandings between Elizabeth and Jack.

Each episode is filled with frontier adventure, drama, life, love, & loss.  Elizabeth is the main character, but there are several other individuals whose stories and lives become very important to the viewer.  Be prepared, you may find yourself talking to the TV, laughing, crying, hissing or even booing some of the people and scenes in this fabulous Hallmark series which will leave you wanting more.


One Extra Note: Be sure you have access to Season 6 before you watch Season 5. You won't wish the finale of Season 5 to be the last thing you see.

Currently, the "When Calls the Heart" seasons can be purchased on DVD linked above, but are also available on Amazon to pay per episode though Season 7.


More Great News for "When Call the Heart" - Hallmark has announced there will be a Season 8!

When Calls the Heart - Hallmark TV Series Reviewed Written by: