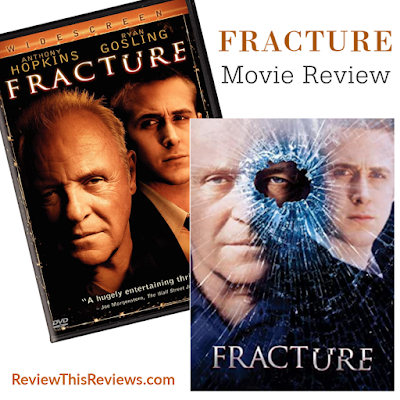 I recently watched Fracture (2007) starring Anthony Hopkins & Ryan Gosling again.  It is one of the older movies in my DVD collection, which I have been delving into lately.

I have been reminded how some of the movies from the past are a lot better than current day releases. They have an actual plot that keeps the viewer enthralled in the movie.  This is not light-watching material that can be used as background noise.  This is definitely a movie that demands your attention.

While there is some bad language, it seems to fit with the plot and not shoved into the dialog for ratings. Even though the movie is about adultery and murder, nothing requires a viewer to turn away due to grotesque or salacious scenes.  None of that extraneous stuff was required in this movie. The plot, itself, is enough to keep you glued to the set.

In fact, my DVD stopped about 25 minutes before the end.  I cleaned, wiped, and even washed the DVD, but nothing I did cleared the issue.  Apparently, my DVD has a deep scratch in it that cannot be repaired.  We were determined to see the end though, so my dad purchased a two day rental just so we could finish the movie.

It is quite sad that my DVD is ruined!  It had been long enough since the movie's release, that I had totally forgotten most of the show and definitely the end.  It was like watching it for the first time.


Plot Synopsis of the Movie "Fracture"


Fracture (Widescreen Edition)I find myself wondering why the movie was named "Fracture".  It could be because of the fractured marriage.  Or perhaps, it may refer to the injury incurred.  It would also be applicable to the faulty thinking due to emotions.  Let me explain why either would be accurate.

Ted Crawford (Anthony Hopkins) is an aeronautical engineer that owns his own company.  He is calculating and methodical. To say he is a genius, might actually be an understatement.

When Ted discovers his wife is having an affair, he doesn't immediately respond.  He plans his revenge.  He takes steps to ensure he will not be found guilty of anything in a court of law.  He shoots his wife, but not fatally.  She is in a coma with permanent brain damage.

When Willy Beachum (Ryan Gosling), the bright shining star in the D.A.'s office, is appointed to prosecute Ted for attempted murder, he believes it is an open and shut case.  After all, he has the assumed evidence, as well as a confession.  However, his legal mind is challenged by Crawford's meticulous intellect and plan execution.

The decisions both of these men make will have a lifetime of consequences.  It was quite fascinating to watch these two men face-off and match wits.

Like any great suspense movie, or book, you should expect the unexpected.  The twists and intellectual genius are what makes this movie spectacular!