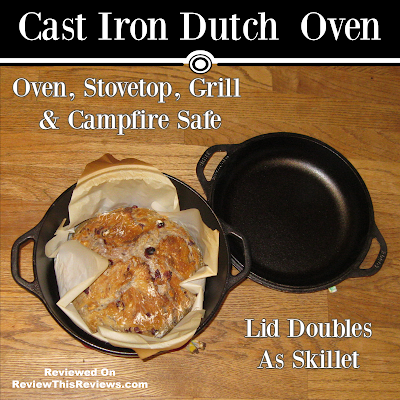 When fellow contributor, Dawn Rae, started tempting me with homemade bread recipes, I decided I needed a dutch oven.  My husband loves homemade bread and I enjoy cooking, so it was time to test my bread baking skills again.

It has been years since I have baked bread other than my banana bread.  I used to bake bread every week, but I got out of that habit when I let my sour dough starter ruin.  I would love to find another really good sour dough starter.  Until then, Dawn's Artisan Bread Recipe is great!  Actually, it is faster and easier than the sour dough bread I used to make and my family seems to be just as happy with Dawn's Artisan Bread.

There are a lot of dutch ovens available, but I wanted the cast iron version.

The Versatility of Cast Iron


Lodge Pre-Seasoned Cast Iron Double Dutch Oven on Gas StoveI have cooked with a cast iron skillet my entire life.  It is heavy compared to other skillets, but you can't beat it when frying fish, frying pork chops, or baking cornbread.

You can use cast iron on a stove top, electric or gas, as long as it has range burner elements (not recommended by some glass stove top manufacturers for a flat surface glass stove top).

Update: Contributor Sam Monaco comments below that he uses his cast iron skillet on his glass stove top all of the time.

Cast Iron will also go in the oven, which is how my mother, my grandmother, my great grandmother and I have all baked cornbread.  That is why I wanted the cast iron dutch oven.  I knew it would be most excellent for baking!

Cast Iron can also be used on a open flame, like a campfire.  I have been known to fish which is rather ironic since I don't eat trout or catfish.  However, when you come from a family with 4 brothers and a mother who loves catfish, you better fish or you are left behind counting the hours.  Besides, I love quietly floating down the river in a boat, soaking in the sun and the beauty of nature surrounding me.

One year, Dad hired a guide.  We caught our limit by midday, but didn't have any desire to stop fishing.  So, we pulled to shore, built a campfire and cooked our fish in a cast iron skillet along with some potatoes the guide provided.  After lunch, we fished a few more hours and brought home fish for dinner.  That is how I discovered a cast iron skillet could be used over a open campfire!


*Seasoning cast iron is simply rubbing it lightly with vegetable oil after washing while it is still warm from the hot water wash or you can place it back in a warm oven after applying the oil.

I chose the basic cast iron dutch oven mainly because I loved the dual purpose lid.  I knew I could flip the lid and bake cornbread on top while a roast baked below it in the dutch oven.  The top would not only be a lid for the roast, but also a skillet for the cornbread.

One note about using the lid on the dutch oven.  In the photo, you see the lid and dutch oven handles are evenly aligned.  I prefer to offset them slightly so lifting the hot lid is much easier.

Dawn Rae chose an enameled cast iron dutch oven which should be fine for cooking on a flat, glass stove top.  You can read her review here: Enameled Cast Iron - Pricey But Worth It

You too can Bake Dawn's Easy No-Knead Dutch Oven Artisan Bread!
To make my bread in the intro photo, I used Dawn's recipe.
I added 3/4 cup cranberries, 3/4 cup walnuts & 1T honey.
Simply click the image below for her recipe. 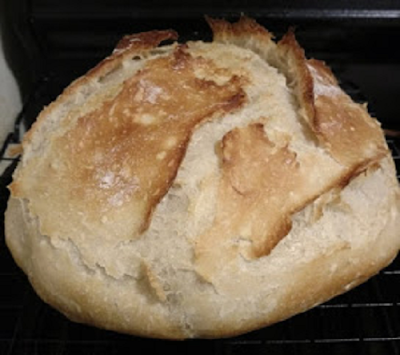