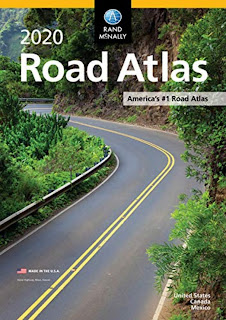 In today's technological world, road maps and directions are available on GPS devices and Smartphones under the Google Maps app. They are also available as built-in accessories to the newer automobiles. Voices announce the turns for us via satellites without the need to read a map.  Other travel information is available on these devices, such as where to locate a restaurant or hotel/motel. You might say that printed maps are no longer necessary. I disagree.

Maps have been around for hundreds of years, dating back to early explorers when some thought the world was flat and maps stated the edge of the known world with pictures of dragons  (“Here there be dragons”) for the uncharted territory.


On a recent road trip in early November, while traveling north from St. Louis, Missouri to my home in the Quad Cities of Iowa, I encountered first rain, then snow, making the 4+ hour trip quite hazardous. I was using the map app on my Smartphone when ice began to accumulate and suddenly I lost all connection to the internet. I do not know if the cell towers were affected or if the information beaming down from a satellite could not get through, but I was saved by the fact that I had brought along my Rand McNally Road Atlas.


The most helpful part of the road map was that it showed me where rest stops were located.  Because of the weather, I needed to stop at several rest stops to clean the ice off my windshield wipers and kick the accumulated snow/ice pack from around the bottom of my car. (Many other motorists were doing the same). So much slushy ice & snow was thrown up from the road and from passing trucks that it was becoming packed around my wheel wells due to immediate freezing from temperatures which had dropped into the 20's. Big blocks of it were sticking out touching my tires. And, despite  having new windshield wipers, the ice accumulation on the wipers prevented them from clearing the windshield enough to see well. I had to constantly stop and clean off my windshield with paper towels and water in my water bottle! It was a mess.

I eventually made it safely home a couple hours later than normal, but I was grateful that I could easily locate each rest area to clean off the car. Luckily I knew what highways to take, having made this trip many times, but it was handy to be able to check the route via my Rand McNally Road Atlas without a working GPS monitor.


The Rand McNally Road Atlas has been in publication for over 160 years.  The company  began in 1868 when Andrew McNally and William Rand (Rand McNally) took over the Chicago Tribune's printing shop and began to print tickets and timetables for Chicago's booming railroads, which are the nation's premier railroad hub.


Throughout the years, the company continued to publish railway tickets and timetables. They have expanded over time to include many products used extensively today by many industries.  By merging with or acquiring other companies in the field, they developed an electronic system for delivery of routing and mileage information to the trucking industries (1980), are now a leading school map and globe publisher (1984), and are a leading producer of consumer and business-to-business maps and atlases (1993).  They also introduced TripMaker® software (1994) and StreetFinder® street navigation software (1996)  for travel planning on personal computers.

These are just a few of the many products Rand McNally produces today.  Here is a handy link if you want to read all about their interesting history.


In 2016, Rand McNally celebrated its 160th birthday and 80th year in the commercial transportation market. I have done a lot of traveling from one side of this great country to the other in my life and have always had a current road atlas.  Even with today's helpful electronics and technology, having a real 'map' I can look things up on is a standard accessory for my 'road trips'. My most recent trip in terrible Midwest weather in November proved to me that the Rand McNally Road Atlas is a travel necessity.