True American History woven into the fabric of fiction! 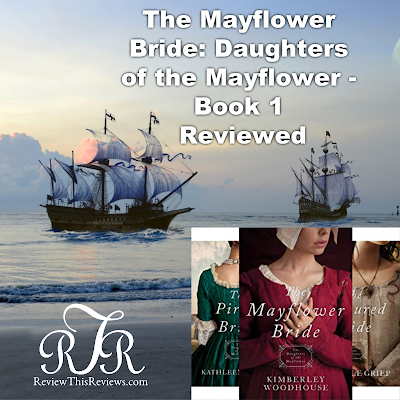 I was fascinated by the real history in this book and riveted to the story.  I had no idea that only 5 women survived the Mayflower journey.  I could almost hear the echo of lamentation that surely accompanied these brave souls who set out for a new world and religious freedom.

In my American History class decades ago, I somehow missed the fact that a second ship, the "Speedwell", started the journey with the Mayflower.  Due to confessed sabotage by the crew that was paid to help settle the colony, the Speedwell had continuous leaks that wouldn't allow it to safely cross the ocean.  The Separatists on the Speedwell, were transferred to the Mayflower, while the fraudulent crew was allowed to do as they wished, stay in England.

In the book, there is a man who takes great delight in tormenting the Separatists.  He bullied the sick church members and enjoyed taunting them with the promise that he would throw their dead bodies into the sea.  The author, Kimberley Woodhouse, brought this real character to life for me.  I was disgusted by his words and I wondered how anyone could be so cruel and evil.  Interestingly, he was a real person, written about in the Pilgrim's journals.  It seems somehow fitting that he was the first Mayflower voyager to die and be buried at sea.

I admit that I picked this book up because I was seeking a historical romance.  However, the history that is intertwined throughout the pages of this book, was very eyeopening to me!  It makes me more grateful to the Separatists who sacrificed and struggled for religious freedom in the New World.


Synopsis of The Mayflower Bride


The Mayflower Bride: Daughters of the Mayflower - Book 1Check PriceJust as the name implies, there is a romantic fiction story too. Mary Elizabeth, a Separatist, falls in love with William, a carpenter, who started the journey as a non-believer.  Part of what makes the love story better, is William's conversion, which he does not do just because of Mary Elizabeth. He truly desires to know God and to worship with the Separatists.

Mary Elizabeth joined her father and young brother on the Speedwell, bound for the New World.  She wasn't happy about leaving behind her mother's grave, her familiar home and life.  It was a frighting change for her, full of unknowns.  However, her best friend, Dorothy, was also making the journey with her parents.  Dorothy's exuberance about the venture helps Mary Elizabeth to try to view it as exciting and a blessing for them to be included in the first group to go.

Williams mentor and master in carpentry, paid for William's part and passage on the Mayflower.  Because William is an orphan who lived on the streets until he was taken in by Paul, they believe the New World offers William a new life.  A future that is unburdened by his past and the condescension of people who know about him.

There are many trials and difficulties the passengers on the Mayflower faced.  Their own survival on the ship, was just the beginning.


Daughters of the Mayflower Series


The books in this series were not all written by the same author.  While I am familiar with a few of the inspiring authors, The Mayflower Bride, Book 1, was the first book I have read by the author, Kimberley Woodhouse.  It is an excellent book to start the series!  I can hardly wait to dive into the second book in the series, The Pirate Bride, written by Kathleen Y'Barbo (an awesome author).  I have no doubt, it will also be fabulous!

It is exciting to discover this new series, especially at this time of the year when we focus on our blessings and our own American Thanksgiving.  After all, the voyagers on the Mayflower were the foundation of our country.


Since this Review was Published, I have read and reviewed several additional books from the Daughters of the Mayflower Series

In The Liberty Bride, Emeline Baratt is sailing home to America. Her allegiance to America is greatly tested when the unthinkable happens.