Daughters of the Mayflower - Book 4 in the Series 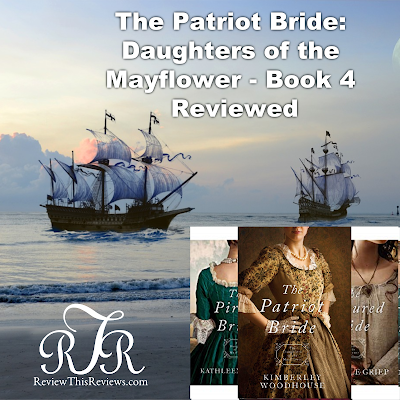 It is unusual to find a series where every book in the series deserves an individual review!  However, that is the case with the Daughters of the Mayflower historical series.

As I have read each book, I have thought it was my favorite.  At this point, I must declare that this is clearly a series of favorites for me.

Because these books are historically accurate, simply written with fictional characters included, I have felt I was walking the path alongside these women.  There are real places, real historical individuals, real historical events that are the foundation of each story.  It is easy to believe these "Daughters of the Mayflower" could have been real people.

In The Patriot Bride, both George Washington and Benjamin Franklin are important characters in the book.  Not one word cast these real men in a negative light.  Nor does the author take liberties with their integrity, as some fictional books are prone to do.  I appreciate her for being true to the character, wisdom and extreme sacrifice of these esteemed men of our real American history.

This book made me sit back and really consider the price of America's freedom.  It isn't the first time in my life that I recognized the dedication and sacrifices of our patriots, but the book served as an excellent reminder that we owe them, at the very least, a debt of gratitude.

I've seen the dates and years written in ink before, but until I read this book, I had not considered how long 8 years is, in reality.  I had not realized that George Washington had not been back even for a visit, to his beloved Mount Vernon for that entire 8 years.  Personally, I don't like being away from home for 8 hrs, or 8 days.  I can't imagine the enormous dedication required to endure 8 years.

The Patriot Bride: Daughters of the Mayflower
Book 4Check PriceFaith Jackson is a mere child whose parents were killed in a home fire.  Her neighbor, a young George Washington, becomes Faith's guardian.  Being an only child, Faith has always looked up to George, like an older brother.  Now, she depends on him for everything.

Because George is a single, young man with a job, he places Faith with friends, a wealthy childless married couple in Boston, but he maintains frequent correspondence with Faith.  When her adoptive parents die, once again George is the only constant in her life.

George introduces her to a soldier, whom she marries.  Sadly, her new husband dies in battle within a week.  Now, Faith is an extremely wealthy young widow.

As a prominent member of Boston society with plenty of free time, Faith, along with a group of friends, provides aid and volunteers frequently to community service.  These activities, along with her long standing relationship to George Washington, make Faith the perfect messenger for the patriots.  She is assigned a permanent contact, whom she meets regularly to exchange information.

It is necessary to trust messengers completely.  It doesn't take long for Faith to form a strong attachment to Matthew Weber.  When he doesn't show for "meetings", Faith worries something has happened to him.  Likewise, if Faith does not make a meeting, Matthew worries about her.  After all, no one understands better than Faith, how anything can happen in wartime and both sides would seek to eliminate spies or intercept inportant messages.


A Few of My Personal Thoughts About The Patriot Bride


If I had previously read a review that told me about the personal tragedies in Faith's life, I might have thought it would be a very sad book to read.  That was not the case.  We were told of the deaths and difficulties, but we were not forced to read chapters of details or suffer with Faith as they happened. 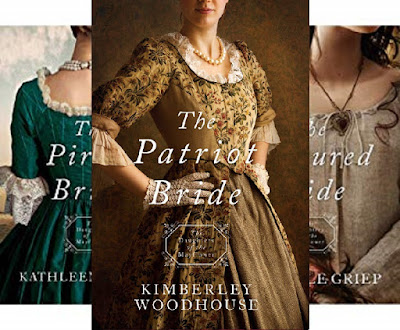 Also, her fondness of George Washington, followed by their continued alliance, actually made perfect sense.  At no time did the author try to make their relationship inappropriate or unfitting of the father of our country.

I thoroughly enjoyed the intrigue, including the stressful uncertainties,  in this book.  Although, I must admit, my favorite part included Benjamin Franklin wearing a dress, which made me laugh out loud in the middle of the night.

Just as the previous books in this series, The Patriot Bride would not easily release me for sleep.  I literally had to find peaceful moments in the middle of chapters to decide to set it down so I could get needed rest.  But, be assured, I awoke with a desire to continue reading instead of attending to my daily work.

I give this book my highest recommendation!

The Daughters of the Mayflower Book Series


While this is a series, the books do not focus on one character.  They are based on a family lineage, descendants of one original Mayflower couple.  Furthermore, the books are written by different authors, which gives each story a unique quality.

Each stand-alone book is most excellent and deserving of individual praise for being outstanding literature.


Previously Reviewed Book from the Daughters of the Mayflower Series

True American History woven into the fabric of fiction! An excellent historical romantic fiction about the Mayflower voyagers: Separatists & Strangers..


The Patriot Bride: Daughters of the Mayflower - Book 4 Reviewed by: