Daughters of the Mayflower - Book 3 in the Series 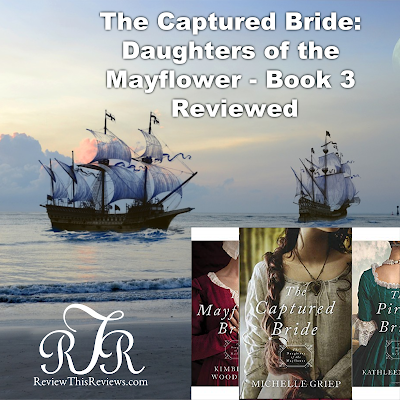 Every book in the Daughters of the Mayflower series is fabulous!

Thus far, I have loved every book in this series and I have been thrilled to find new authors (to me) that I can trust to offer excellence in writing without explicit, gory, or less desirable content.  Simply, pure literary entertainment that is well worth reading.

Background on the Daughters of the Mayflower Series


As you may already know, or have guessed, these books are filled with American history references and characters.  The historical accuracy is part of what makes them so fascinating.

Each book places a Lytton descendant in a pivotal, or important, place in the history of America.  The characters and plots are all compelling. Even though the series was written by different authors, the books have a cohesive thread.  I can detect a bit of author individual style in the books, but it is not so obvious that it is detracting from the stories. 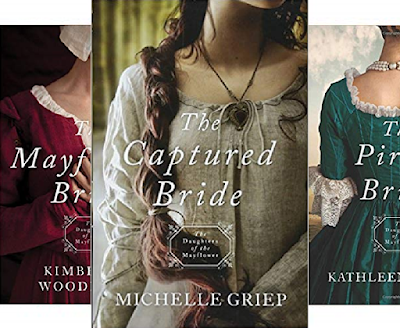 
One could hardly write a series about American history and omit the American Indian heritage.

The Captured Bride: Daughters of the Mayflower -
Book 3Check Price Mercy Lytton is the daughter of a Mohawk Indian and a captive white mother.  Because of her mixed race, Mercy has loyalties to both the English and her Native American tribe, which are aligned against the French.  Her keen eyesight and ability to move throughout the woods without detection make her the perfect scout for the English.  For years, Mercy has worked closely with Captain Matthew Prinn.  She scouts and he has her back, always protecting her.

Mercy and Matthew are assigned to transport gold from one fort to another.  Since it must be moved by wagon, they are to pose as a father, daughter and husband.  However, who is the husband?  Much to Mercy's disdain, her designated "husband" is a prisoner of French heritage.  They are instructed to never give Elias Dubois a gun.  He is simply being transported along with the gold.

On their journey, it becomes necessary to form a fragile alliance with one another in order to survive, but Matthew & Mercy are hesitant to fully trust Elias.  They hold to their orders and refuse to give him a gun.  However, Elias proves to be a formidable foe without a rifle.  Unbeknownst to them, Elias has his own agenda that, for now, is served well by being aligned with the traveling scouts.

At least, that is his plan until the unthinkable happens!

My Personal Opinion of "The Captured Bride"


I always love a book that surprises me and holds me captive.  Thus was the case with "The Captured Bride".

While the name of the book gives some expectation of what must take place, the how, who and why, was still rather unforeseen.  This book takes the reader on a journey of their own, full of adventure, intrigue and completely unexpected events.

Yes, I was fighting sleep because I simply had to keep reading.  It was a sad moment, yet satisfying, when I realized I had read the last word.

The Daughters of the Mayflower Series

The Captured Bride: Daughters of the Mayflower Book Reviewed by: