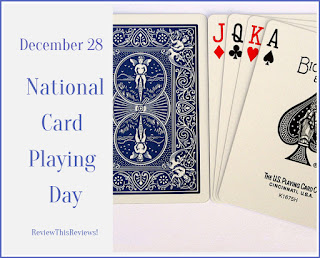 Playing cards any time of year is fun, but it's an especially entertaining activity in inclement weather.  Thus it is the perfect indoor wintertime activity. This unofficial holiday is held on December 28 each year right after winter officially begins.


There are literally hundreds of different kinds of card games that can be played using a standard pack of cards.  Some of the top favorites include  Spades, Poker, Solitaire, Spite and Malice, Hearts, Spoons, Gin Rummy, Black Jack and Texas Hold’em.


You'll Have Hours of Entertainment

From the 9th century to modern day, people have been entertained with playing cards. A simple deck of 52 provides us with hours of fun in a wide variety of card games, either by yourself (solitaire) or with groups of 2 or 4 or more. It's an activity that will never go out of style!


Cards are Popular at Any Time


No matter what the seasonal time of year or time of day, this is a very popular form of entertainment. From simple 'matching cards' for very young children to intricate ones for adults to the ageless variations of Solitaire, cards hold our interest in many forms: 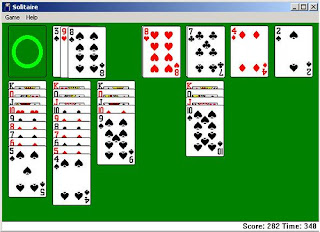 Solitaire is also called Patience and refers to single-player card games involving a layout of cards with a goal of sorting them in some manner. Anyone who enjoys card games likes Solitaire. There are more variations than you can 'shake a stick at' and in today's computer age the standard Solitaire game on computer has really increased it's popularity and is irresistible when sitting in front of your computer. (My favorite version is 'Spider Solitaire)


A couple years ago I learned a new card game called "Three Thirteen" that is such fun. It's a form of Rummy and is an eleven-round game played with two or more players. The Rules can be found on Wikipedia. I've played it with just two players, with three players and with 6 players and each way is enjoyable. My favorite part of the game is the fact that the wild cards change with each hand!

*Two Years Ago: My son & I have been playing 3-13 once or twice a week all year. We have been keeping a running score sheet of each person's score, with the prize being dinner at a restaurant for the winner (paid for by the loser) at the end of the year. At the moment, I am 199 points ahead and have my choice of restaurant picked out!
*This Year: Son & I have continued our weekly 3-13 games and THIS year son is ahead in the 'free dinner' race by over 400 points. I don't think I have time to 'catch up' before the end of this year! LOL. HE already has his favorite restaurant picked out. :)

My Love of Card Games

I've enjoyed card games all my life, from childhood hours of Canasta with my grandmother to teaching MY grandchildren "War" and "Uno". I grew up in a card-playing family.  My parents seemed to learn some of the most unusual card games over the years, having a "new" one to try every visit.

My favorites are Pinochle, Kings-on-the-Corner and 3-13. And the most fun card game ever I learned by the name of "Dwindle". It may be known by other names. You can't beat a deck of cards to give you or you-and-a-group hours of entertainment


Playing cards were found in China as early as the 9th Century, and it's popularity has continued to grow ever since. I can't imagine not having a deck of cards around. It is fun entertainment for all ages.

The Playing Card Version of the Classic Monopoly Board Game